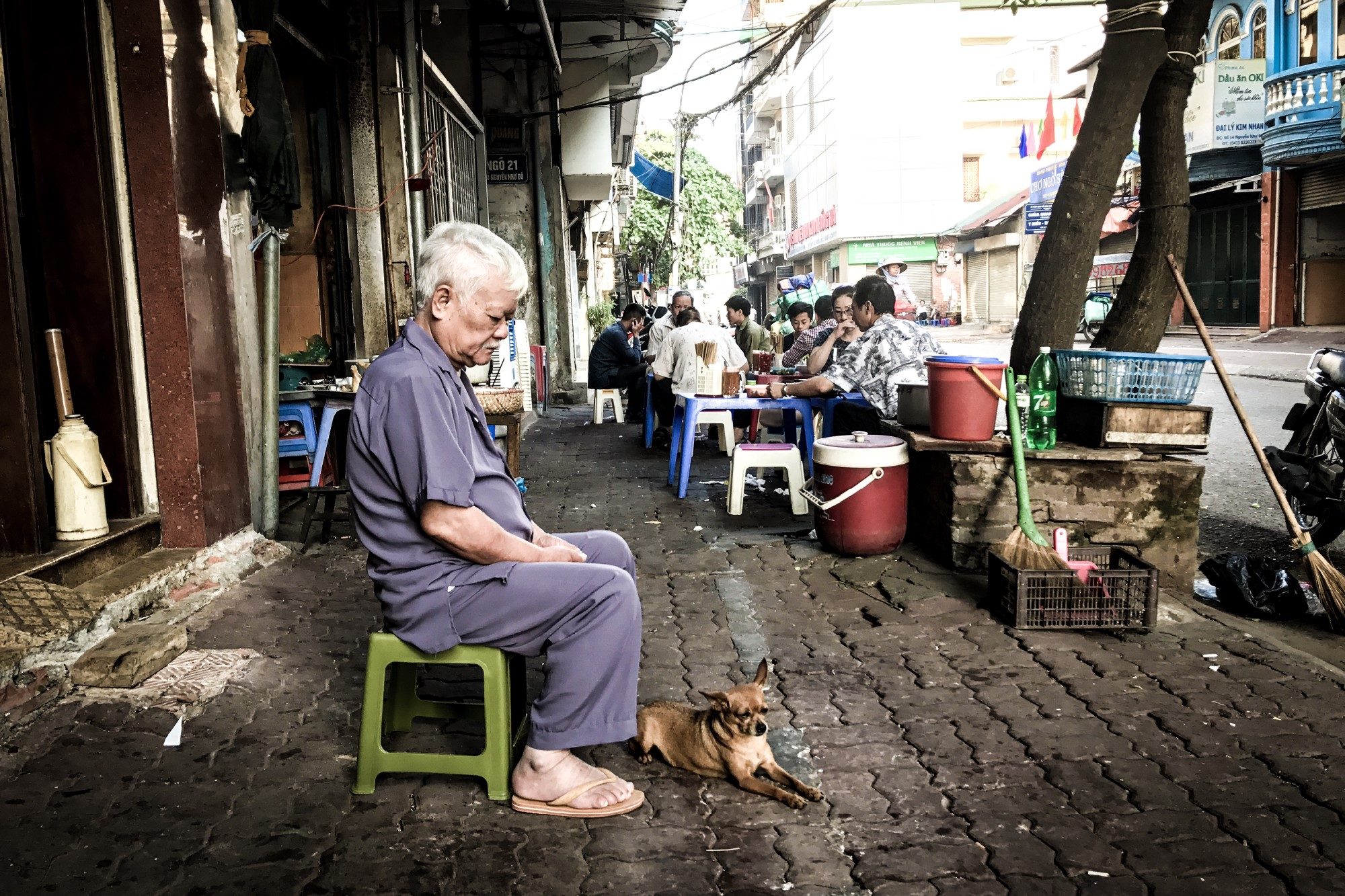 Bevore we move on to Hanoi, this post will start with a one night stopover in Singapore.

I flew to Hanoi via Singapore where I had a short one night stopover. Late night arrival. Lunch departure the next day. No time for sightseeing. I was not so happy about my broken guitar. Thanks Singapore Airlines for forcing me to check-in my instrument at the gate when there was enough space in the overhead compartments. This time, my mind-influencing skills did not work. 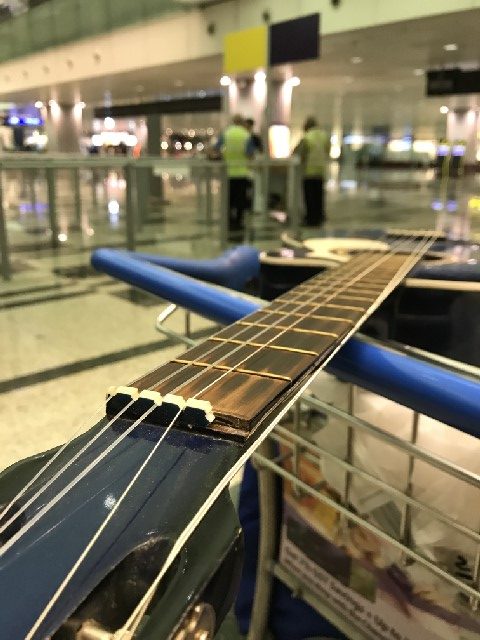 Oh no! What the f***? I got cough attacks like hell. Like being about to puke. The natural eucalyptus honey drink I bought in Australia does not help enough. The guy from the hostel reception in Singapore recommended to see a doctor. He knew a place to go to. I walked outside on Singapore streets. Lucky me: It started to rain. The indication? 30 degrees and humidity to an extend you think someone is hitting you with a board directly in your face! Haha. Anyway, I talked to a doctor and I expected to get some antibiotics. And, big wonder, they handed me some tablets for the running nose and some tablets for the cough as well as some liquid for the cough. I don’t want to know what bullshit that stuff contains. I have not taken antibiotics, any pain killers or other industral pharmacy stuff since I was three years old. Even after they took out my wisdom teeth. No pain killers for me and no antibiotics. This time, I decided to take this antibiotic medicine. While I was flying on the plain and after I had eaten some instant pasta, I took the tablets. I thought: “Ahh!!… What am I doing to my body here?” I took only the tablets for the cough. Who cares about a running nose, that’s not pulling me down. Why did I take antibiotics this time, although I’m convinced my body could quite likely manage it completely on its own? …Well, recovering from being sick requires to relax and it’s – in fact – not easy to rest while world-travelling. I’m going to Vietnam into the wilderness. From my view its better to be treated by Singapore western style medicine now, than later somewhere in Vietnam out in the green in case it gets worse. The train was going to leave from Hanoi into the countryside in two days. I was sure, I will only leave Hanoi if I’m fit again. A weakened immune system in an Asian country bears some risk, I assumed. Different bacteria that need to be handled. Safety first, also for wild guys. 😉 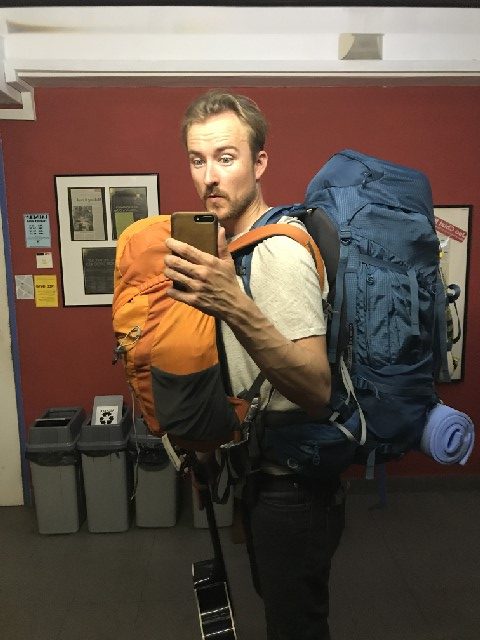 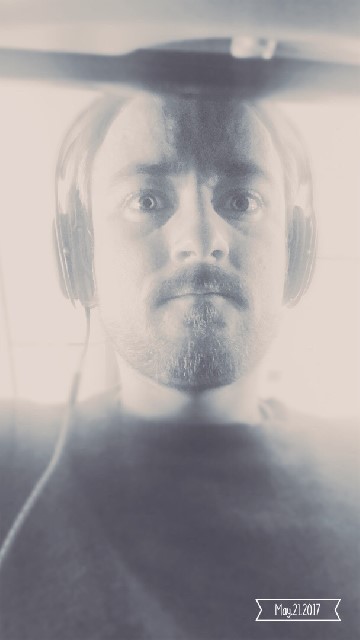 At the hostel I met a doctor from Florida, Francisco. He recently graduated and was now traveling for some weeks. Also, Meli was waiting at the hostel to kick off our two weeks vietnam trip. She’s is a friend from Augsburg, Germany. We explored the city in the evening. Nice street music in the background: 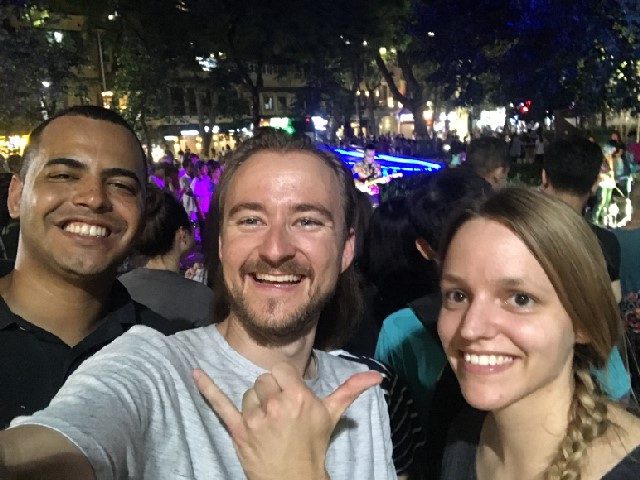 The next day, Melli and I started with some morning walk, exploring the surroundings. We went to see the temple on lake Ho Hoan Kiem which is located very central in the city. Then, we went to a central corner place for some crazy cold fruit juice tea mixture. Fancy glibbery stuff inside.

As digital native, I needed a SIM card. What a crazy deal they offer! This data plan provides 20 GB LTE/4G internet for 30 days prepaid for 200.000 dong. The SIM card is another one off 50.000 dong. The guys of you who read my stories about prices in South America: Take a deep breath…. Vietnam is beating that. These 250.000 dong are no more than 9,80 €! For 20 GB internet one pays no more than 200.000 dong which is 7,80€. (Local purchase power not taken into consideration and I generally felt everything is eight times less costly than in Europe). And this mobile network is fast, unbelievably fast! The great benefit: I will not need to limit my mobile internet use at all (I never watch movies). Poor Germany, poor Europe! Why do we not make our networks ready for the future? We, as leader of the first world countries. We once were inventors. Do we really want to fall behind with future technology? Look at Vietnam. For us, it would be a great win of productivity. Everywhere, all day long, internet high speed. Politics in Germany, please act! We want more volume with higher speed for lower prices. In fact, we don’t just want that, we desperately need it to keep up the pace of digitalisation, which is going on out there on the globe!

A new haircut should promise fun 🙂 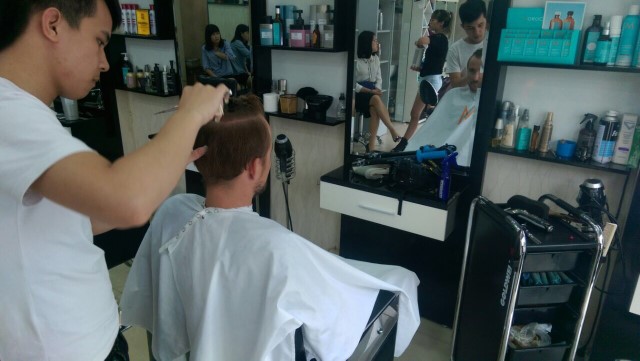 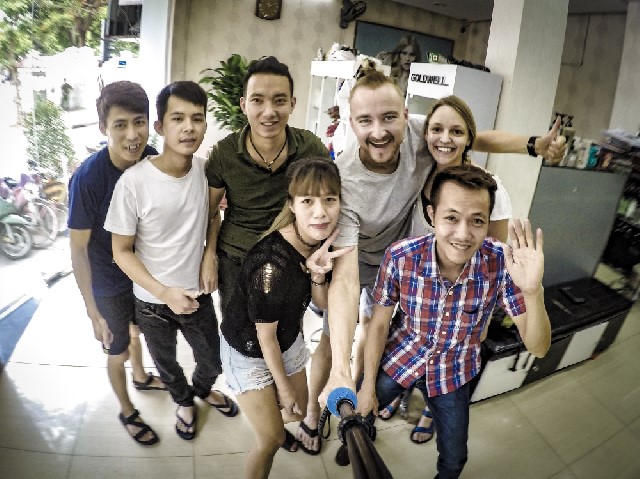 Walking around in the city of Hanoi: 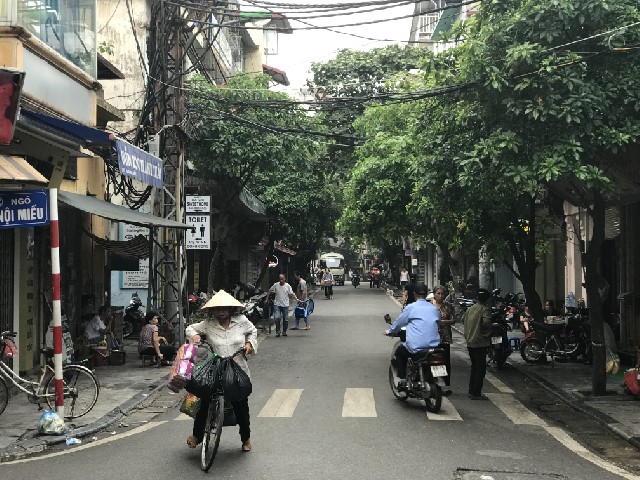 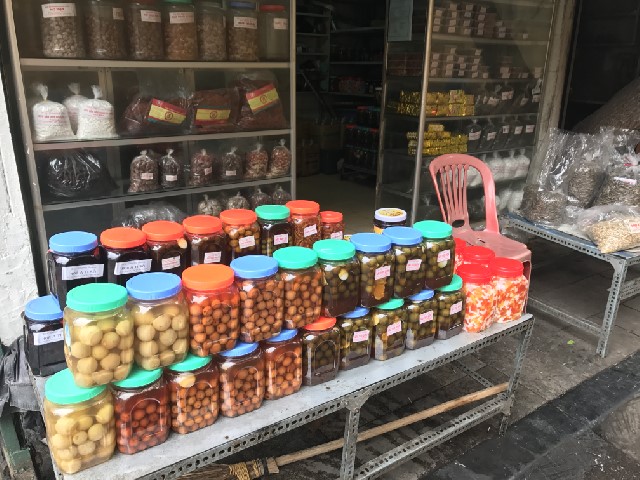 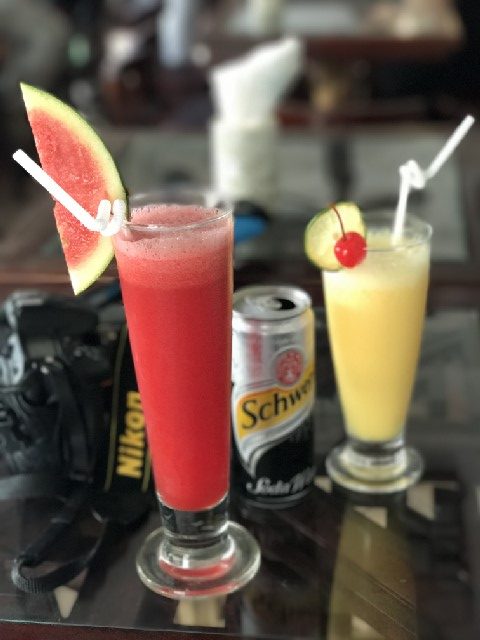 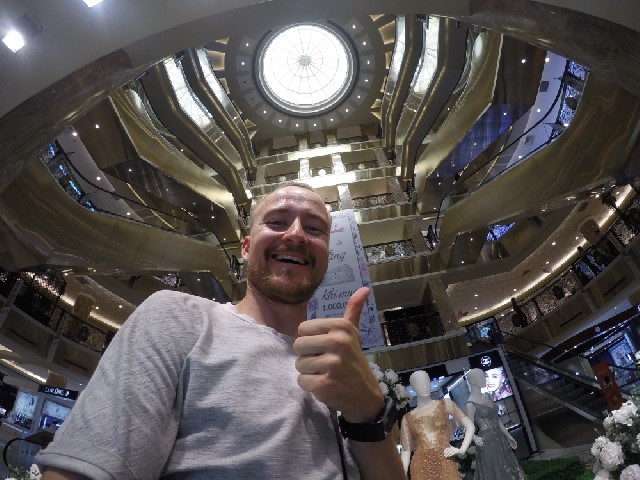 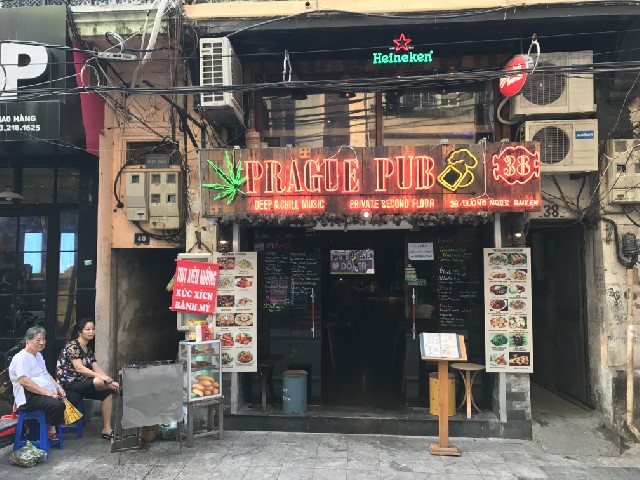 I talked to some guys who were sitting on a table at the side of the street and I asked for a good place to have some lunch. Following their recommendation, we got some nice dish with pork and green fresh herbs. So tasty!

Let’s watch that water puppet play at Thang Long Water Puppet Theatre! Getting a ticket works like in our old days. One buys it at the ticket front office outside the theatre. Seeing the show one time was nice. No motivation to go in a second time, however. 😉

After relaxing a little bit at the Old Quater View Hostel, Linh came to pick us up for an awesome local evening out in the Old Town of Hanoi. Linh is the cousin of one of my friends, we call him “The Quan”. We will meet him later after our Vietnam round trip since he will fly into Hanoi from Germany for his holiday. Together with Linh, we enjoyed a nice BBQ as well as hot pot under the train trails. No matter, a well-known place to eat out. Afterwards we walked through the street to soak in the evening life. 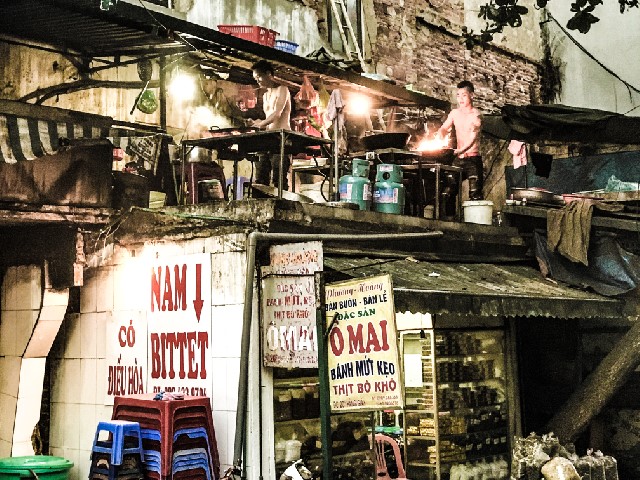 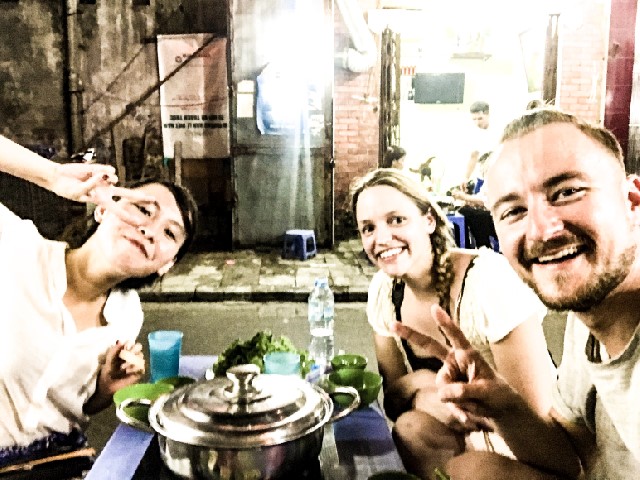 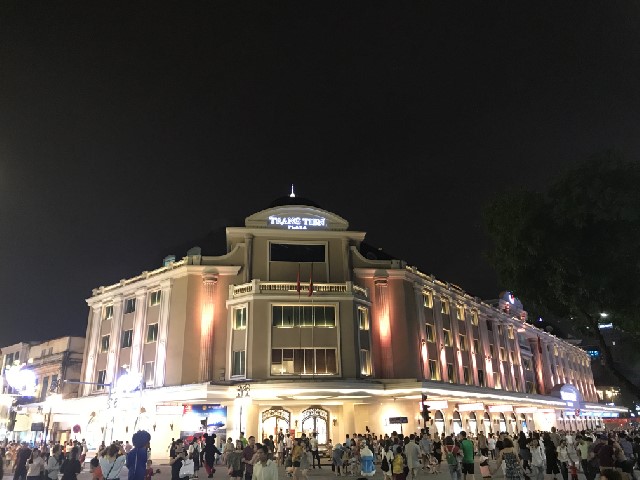 We bought these typical Vietnamese tourists hats. They were brand new and shiny. Urgently, my hat needs to be soaked in dirt to make it look more local. 😉 Bigger size 1.30€, smaller size 0,75€. We arrived at St Joseph Cathedral to have a sweet lemon ice tea. Later, we headed back to the hostel from where Linh should make her way home on her motor bike. Linh, thank you so much for showing us around and providing this amazing local experience in Hanoi! You are awesome! 🙂 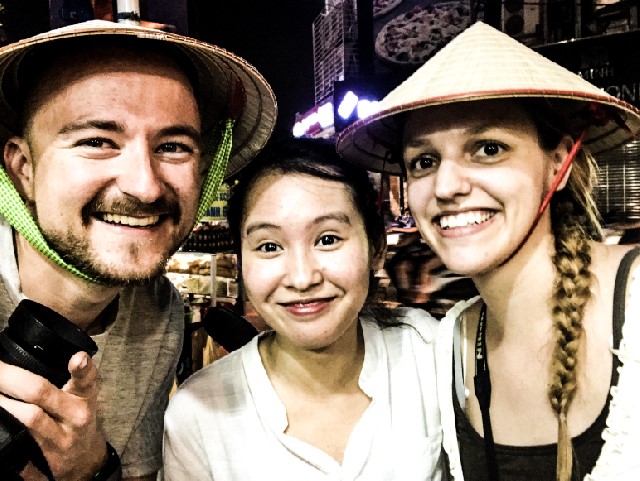 After a free breakfast in the hostel, we went to a secret place… Well, Lonely Planet secret. 😉 Pho Co Café. The café is located on top of the city with a great view at lake Ho Hoan Kiem. Lucky us, it was not busy at all! 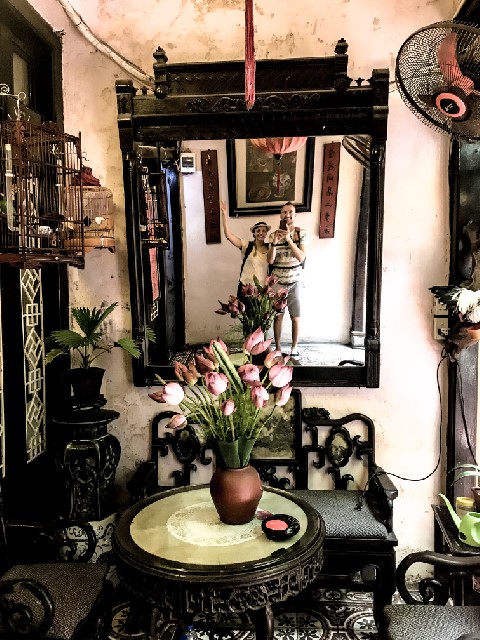 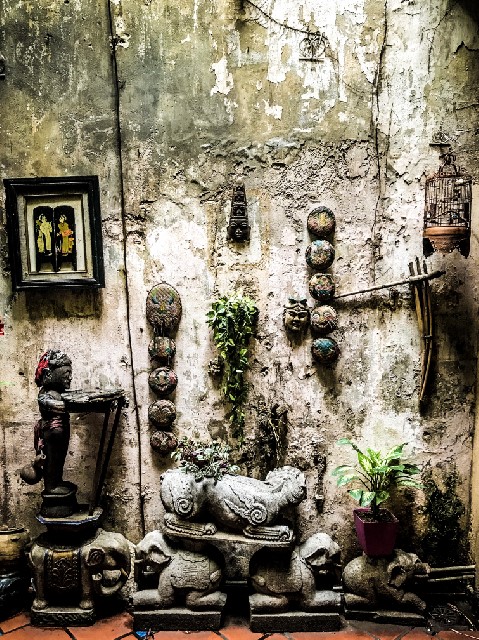 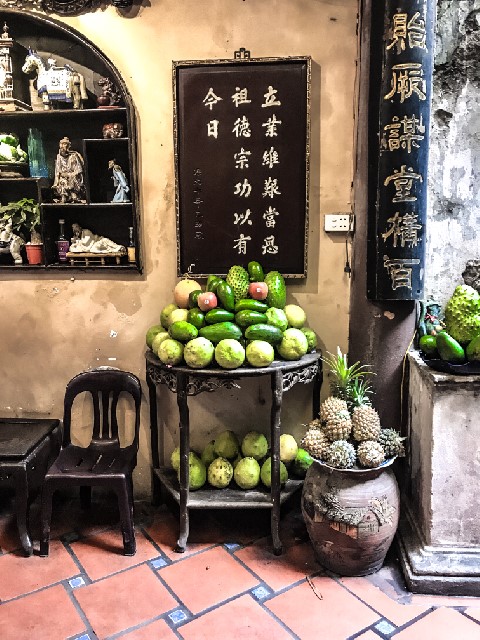 Afterwards we went to the Literature Temple. Quite nice. Some school classes were around as well. They all wanted to take photos with us. Crazy. And they are all smiling, happy and very interested. I like their friendly attitude. Much better then the one in countries I visited in South America, I must say. 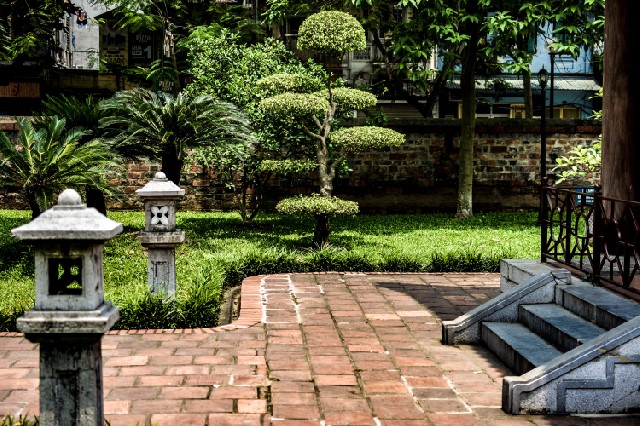 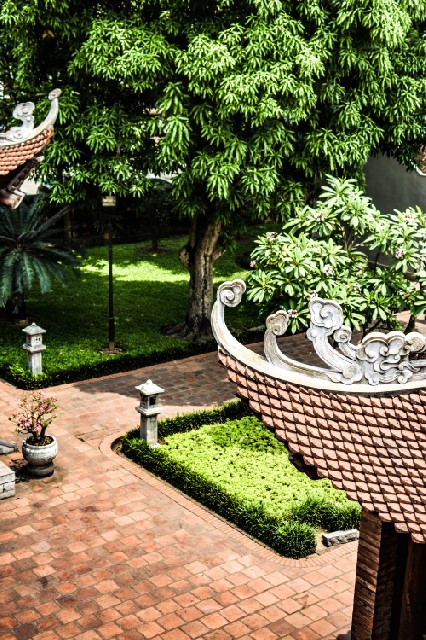 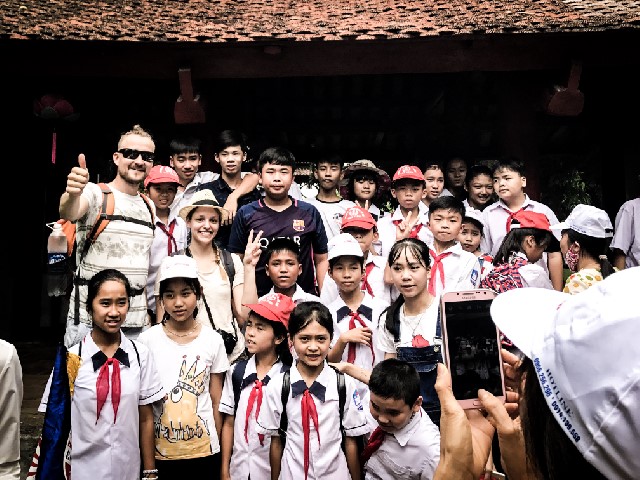 It was hot. We enjoyed iced tea in an air conditioned café.
The funniest Uber driver ever! Hard style techno music in his Hunday Grand i10. 🙂 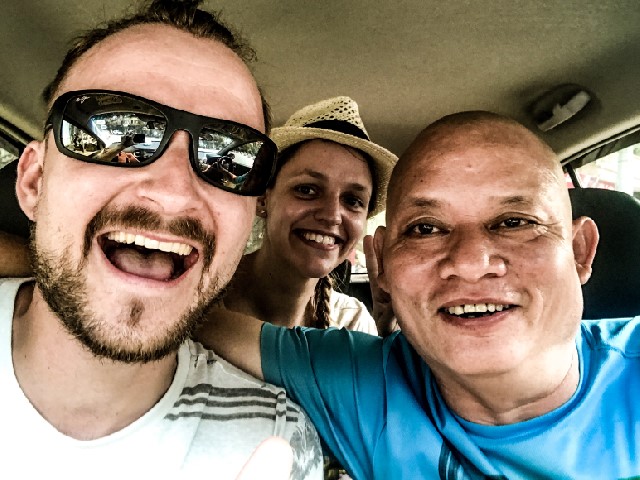 By the way, an Uber ride Is usually below 1 € for around 10 minutes. Beaten South America again.

Passing by at a stationery shop, we bought a two component glue and got some 0.4 l of cleaning alcohol for free. Melli, the educated Adhesive Master, was so kind to repaired my guitar. 😉 I learned some new DIY technics. Thanks Melli! We hang out at the hostel and meanwhile I played the hostel’s guitar without singing. My voice still needed some rest.

We got some local dinner at a place that Linh recommended to us. Locals only. Our table neighbours asked us, how we knew about that place? When we were leaving, another women asked us again, how we knew about this place? She also wanted to know, where we were from? Since her daughter is learning German, they invited us for some nice salad around the corner. We went there with the women, her daughter, her sister and a guy from Strasbourg. Afterwards they took us to the souvenir shop of a friend to shake some hands. 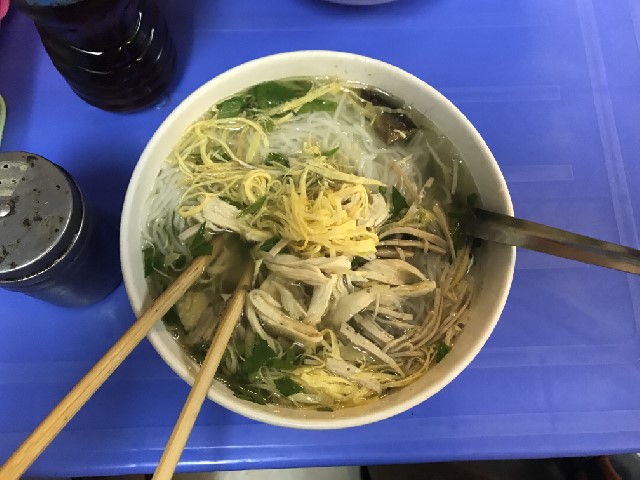 Quick shower at the hostel. We ordered an Uber for the train station. Our train ride on the “hard bed” coach was about to departure for Sapa. Hard bed? They should have called it wooden bed. 😉 Luckily I had my camping matt from New Zealand still with me to get little more comfortable. Melli started a conversation with the train conductor to understand if the other four beds in the train compartment will be occupied later. The guy looked irritated and said “No”. If Schulz von Thun would have been around. 😉

For my lovely travel mate Melli, it was desireable to become more comfortable and to get a good rest. Therefore she took the covers from the other two beds above and used them as additional matts. A few stops later, two more guys joined us in the compartment. Melli handed back the covers quickly, little embarrassed. 😉 But still innovative enough to take the two covers from the very two top beds. …Everyone was sleeping at 1.00 a.m., when one more guy was directed into our compartment. Top bed for him, just next to the air conditioning blowing cold air into his face. In the morning, one could see that the guy covered himself with his jacket to the very maximum possible. He survived the night. Melli’s back had a comfortable night too and did not hurt. Everyone happy… 😉

Follow us on our way through the local country-side around Sapa close to the Chinese border.