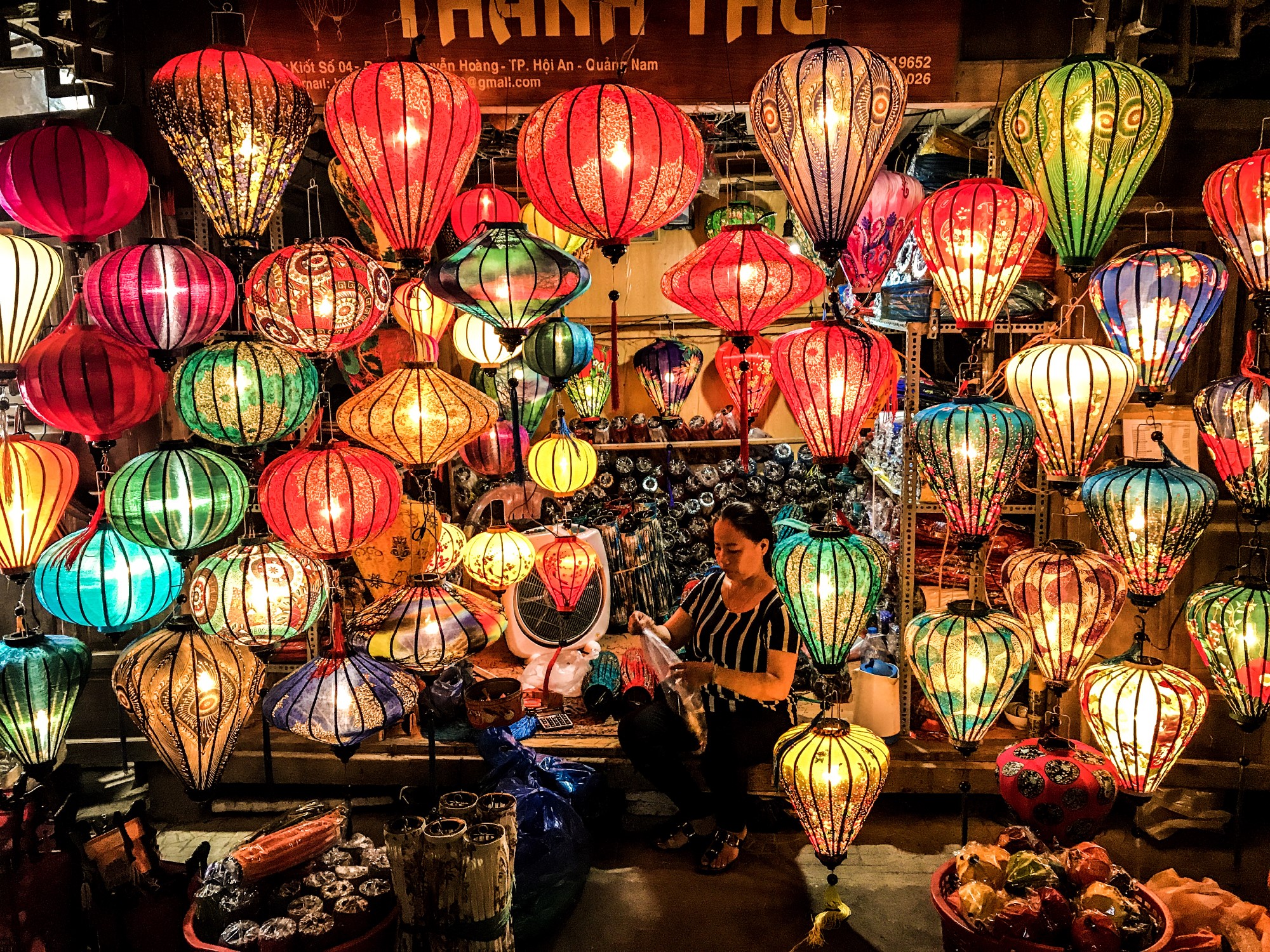 Learning of the last five months: Just don’t give a fuck! There is always a way leading to joy, happiness and success.

To our surprise, the train arrived in Da Nang an hour late. Well, we had an accident on our way. Then, we took the cab to Hoi An, sharing the ride with two nice guys from the Netherlands. We will meet them later again. Some amazing food, fruit juice and beers followed. Later that night, we checked out the old historic town, which is UNESCO world heritage. At a bar with guitar live music, we met Jen and Owen from New Jersey. They just finished their doctor education. A good conversation, so I asked my question: “What does happiness mean to you?” Owen started to answer. For him, it’s the balance of doing what he wants to do and having pre-set limitations in what he may do. It’s not quite freedom but a limited version of it. Jen responded that happiness to her means to spent time and moments with family and friends.

What a wonderful desert, just delicious. Wrapped in banana leaves: 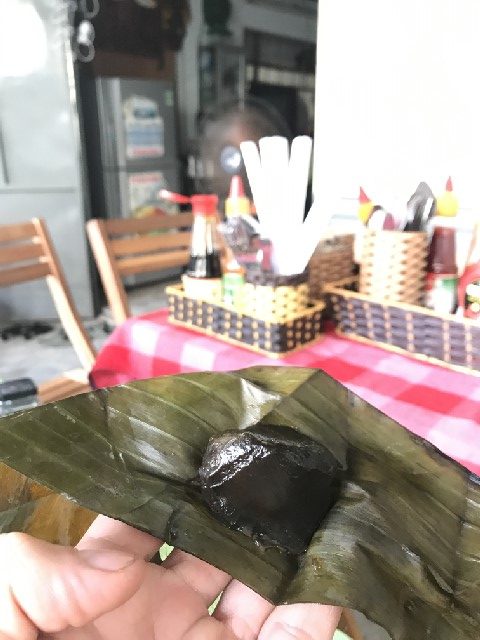 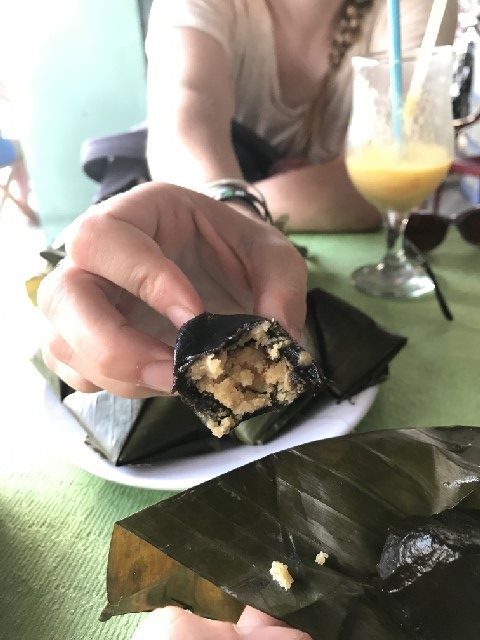 The calendar says I’m turning 30 today. For that reason. Melli brougt a home-made birthday cake from Germany. Very delicious. We realized that the travel agency, where we booked a flight from Da Nang to Hanoi yesterday, messed up two things: Our first and last name was mixed up and the flight was booked for Friday, the 2nd of June instead of Saturday the 3rd. The   wrong date was chosen due to the fact that the calendar, which was lying on the desk of the agent, showed September 2017 and we just showed the guy that we want to fly on Saturday. Well, in September, the first Saturday of the month is the 2nd. Ticket changing fees are almost as high as getting a new ticket. The agent did not really bring up some good trades nor a satisfying solution. Also, the language barrier made further discussions very difficult and finally we accepted. I failed in the negotiation this time. Better we enjoy the time in town that we have left. Why did we book with an agency and not online? Well, the luggage allowance is presented very, very badly on the web page in terms of transparency, especially when we look at budget arilines. 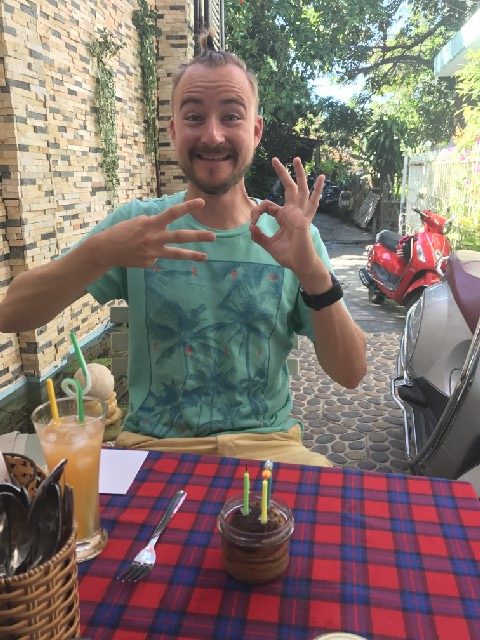 In the evening, we went out for dinner with Jessica and Jarno. The two lovely guys from Netherlands. Very cool travel folks. I must say that during the trip, I realised that I absolutely like the Dutch. Thanks for the great night out guys! 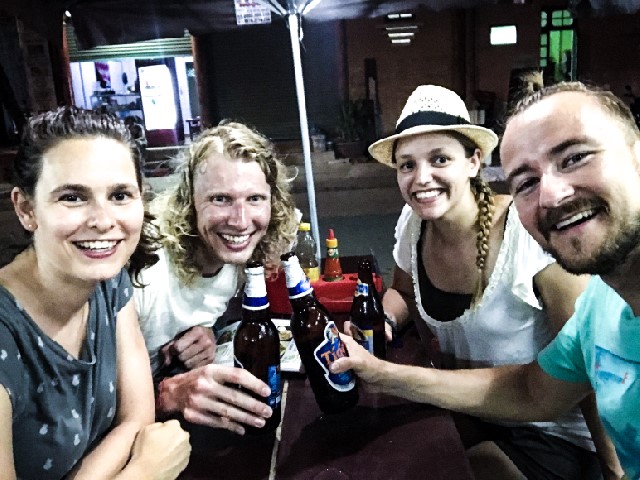 The city of Hoi An is just beautiful and a paradise for taking nice photographies:

Taken somewhere on the street: 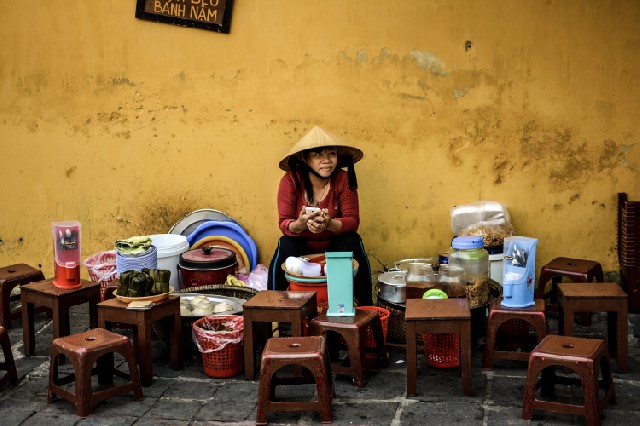 At the local market: 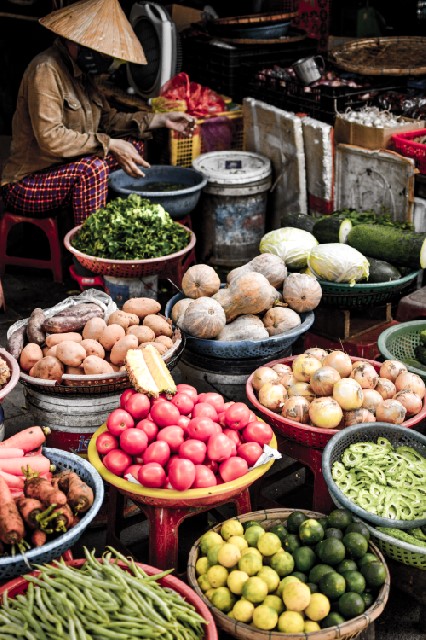 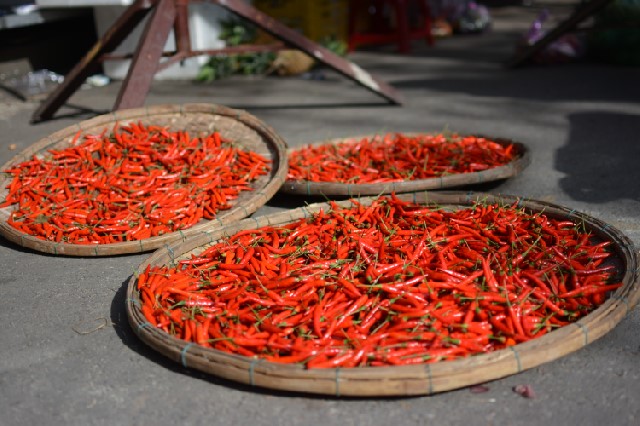 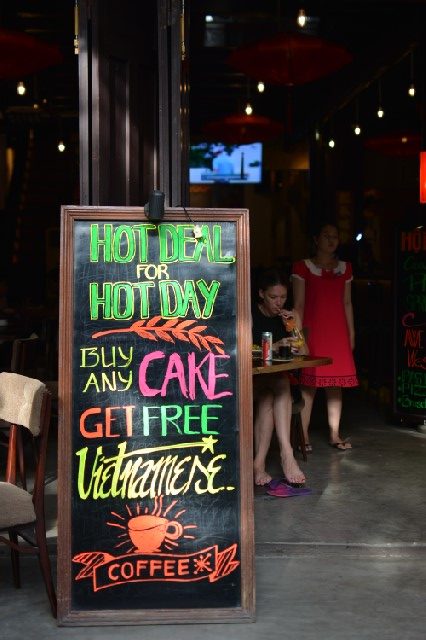 People sitting inside a restaurant: 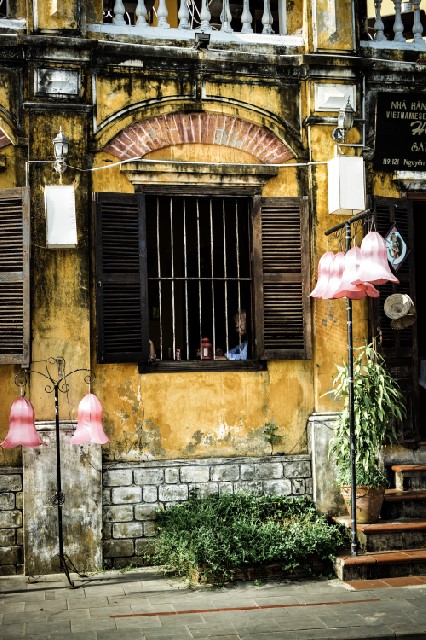 Someone selling a newspaper to a restaurant guest inside: 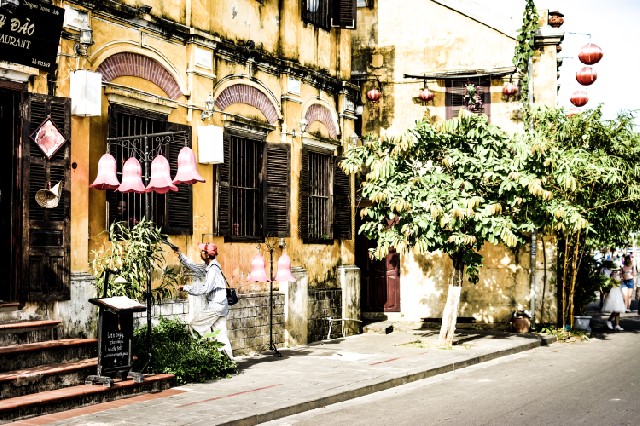 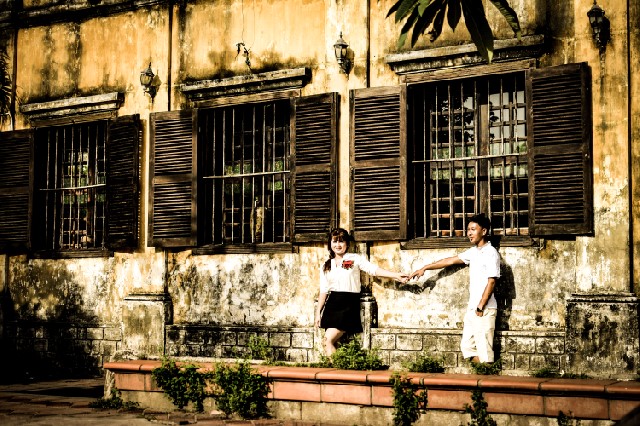 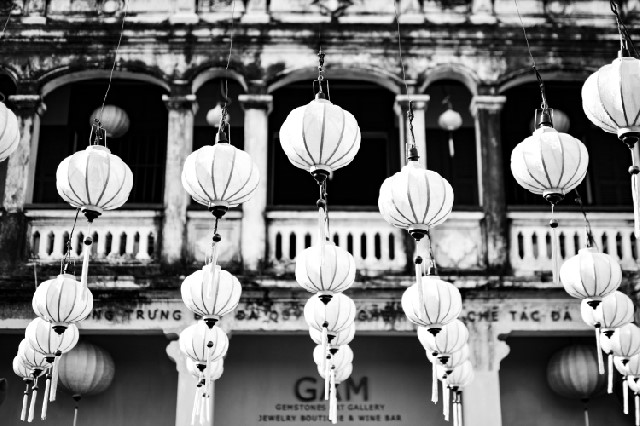 That’s how they survive. Selling food on the street, carrying heavily: 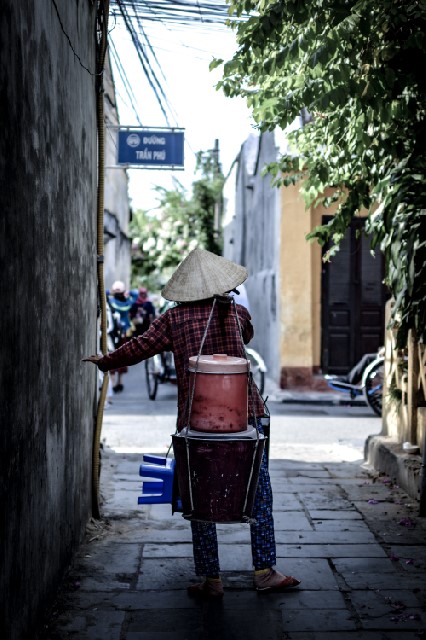 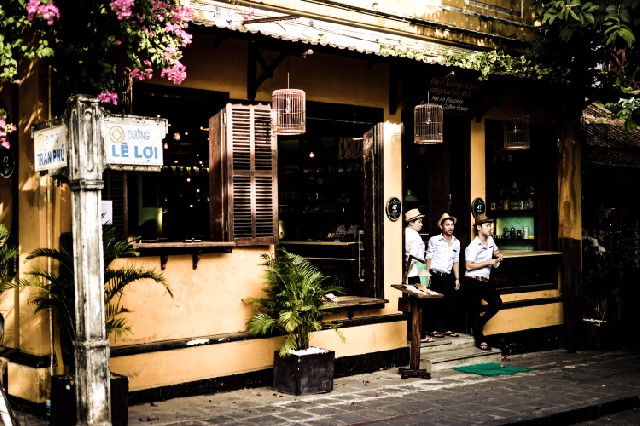 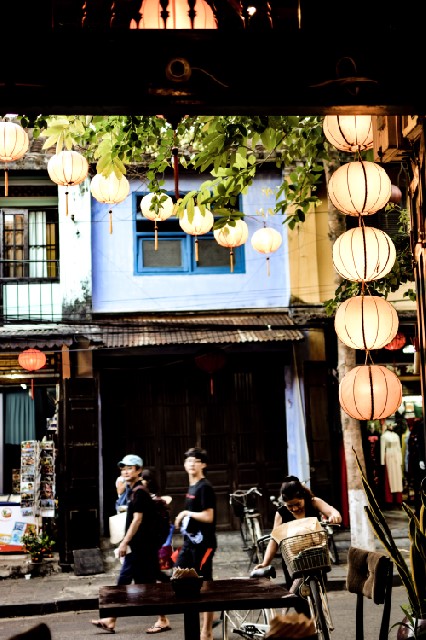 Inside a café – interesting contrast on the wall:

Outside in anoter café place where we hang out for a while: 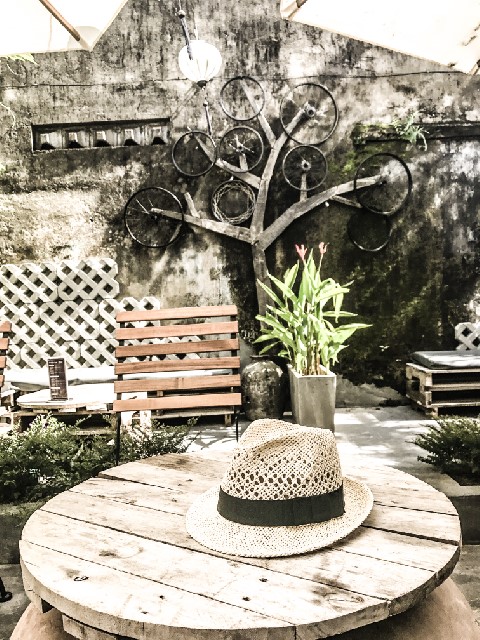 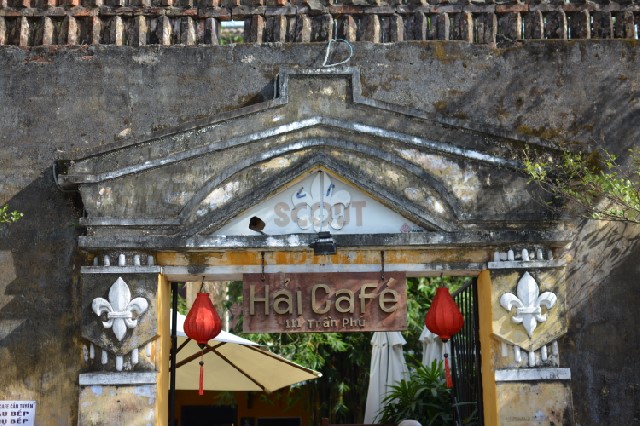 The restaurant place at nigt: 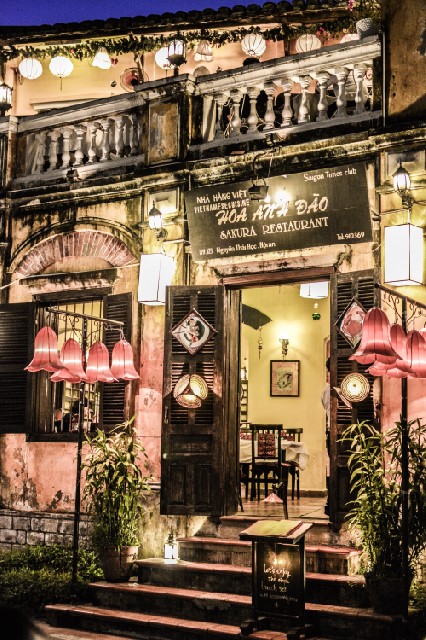 Walking over a bridge: 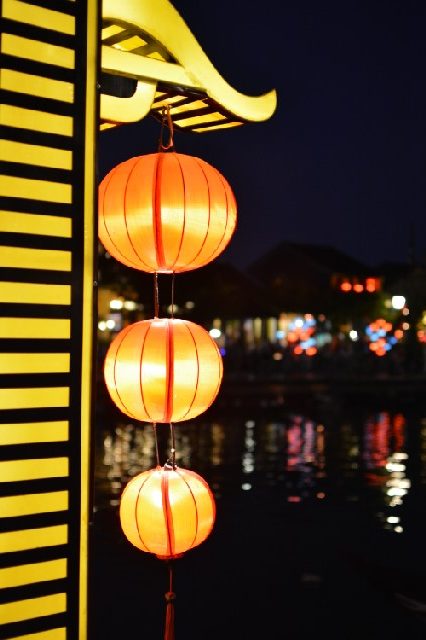 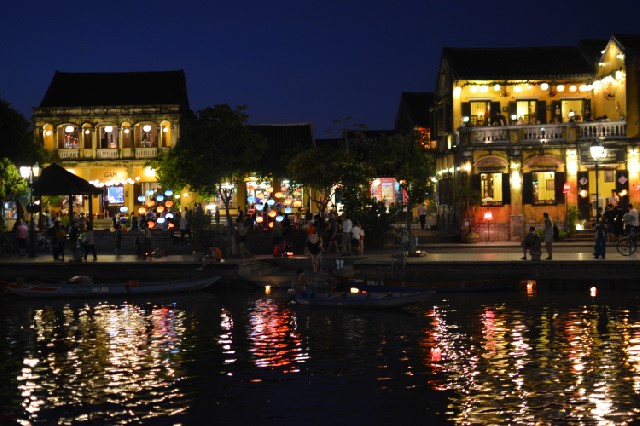 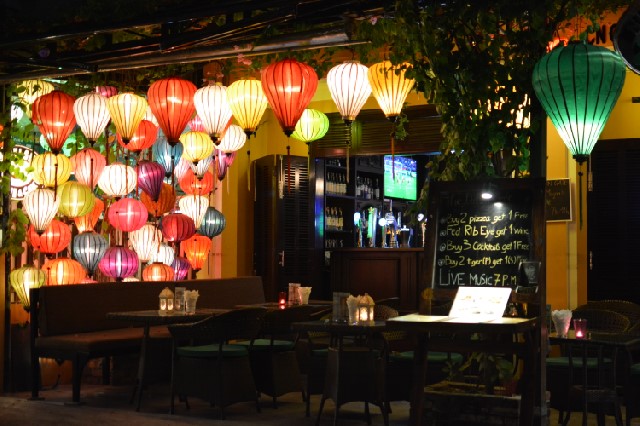 Ok, we had to leave Hoi An. Which was not so bad after all, since this very touristic place is not quite my style any longer. Looking forward to meet my Vietnamese university mate “The Quan” and his sister Hamy in Hanoi!! Yeah, the local experience once more. Quan was born in Vietnam and speaks the Vietnamese. Meanwhile he is pure German without a Vietnamese passport any longer. He and his family run the best sushi place in Augsburg! It is also one of the best rated restaurants in Augsburg according to Tripadivsor and Yelp. Check it out whenever you are around! www.kigiku.de.

The day before, we ordered a private SUV taxi to get to the airport – in 40 minutes – 10€. At the airport, we checked-in at the counter and waited at the gate. The line at the gate was getting shorter – like 5 people left – so we stood up from the bench to board the plane. It was 20 minutes before take-off and we were supposed to transfer with the bus to the plain. Suddenly we hear, “Last Call for Hanoi with Vietnam Airlines for Alexander Okl and Melanie J.” What the fuck? We realised they changed the gate. Where the hell is gate 8? …running … down the escalator …we made it just in time. Lots of smiling people looking at us, while we joined on the bus – not! 😉

As far as I remember, this was the second time my name was called at the airport on my world round trip. Well, as this is flight number 24 that makes it a rate of 8.33 %. Not quite six sigma style but still acceptable, I think. Haha.

Actually we took that picture a few minutes before our call. 🙂 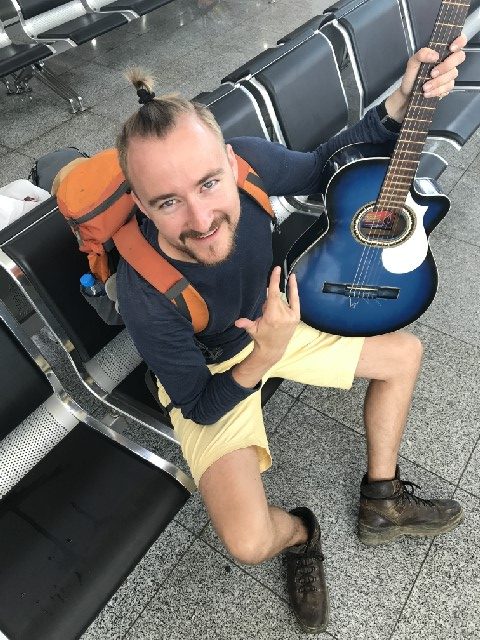