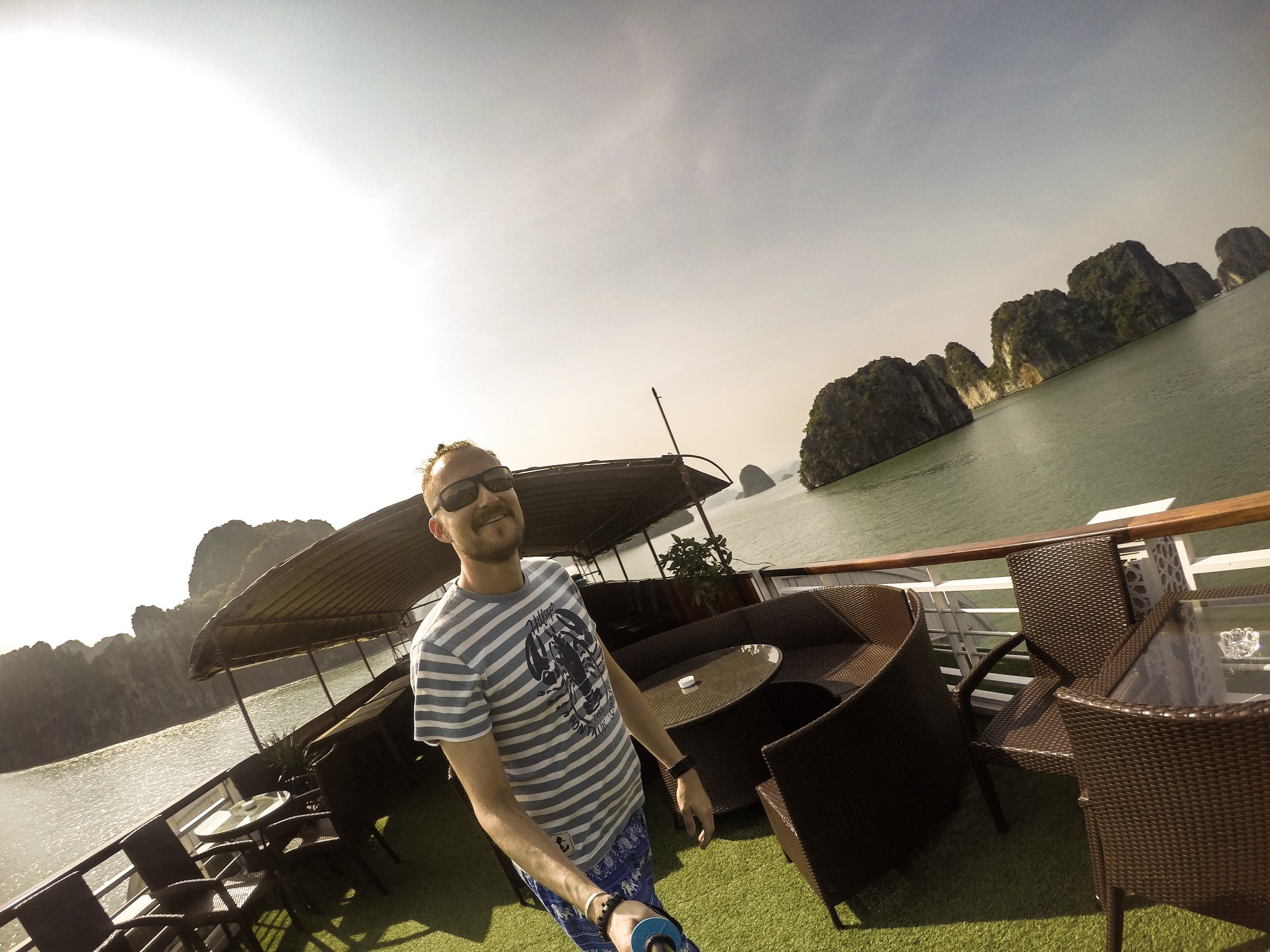 It’s the 27th of May, not very fresh from the night train, we arrived at Hanoi Central Train Station early in the morning. We were about to head further to Ha Long Bay, being part of a fully serviced tourist program starting at 10 a.m. I was wondering what I should think of that kind of tourist travelling. That’s not my style any longer, I was used to free travelling for the last five months. Anyway, I seeked for a shower. But also for some breakfast. The latter could be fulfilled. Nice soup with chicken – again for breakfast. Do we get sick of soup meanwhile? Yes, we do, slowly. Can we have a big American breakfast? No we can’t. Not available here. Haha. To wake up, we drank a coffee and I played the guitar on the street while watching crazy Hanoi people walking by. Ok, some locals walked by and probalby thought… tss, crazy European gutarist. Actually at that place the title picture of the previous Hanoi post was taken. Then, we took an Uber to the Paloma Cruise Office, waiting to be picked up by our bus to drive to Ha Long Bay. May the flash packer tour start. 😉

We decided to go with Paloma Cruise for a variety of reasons. First, it saves time to go with such an organisation. We reached out to another company and we would have preferred them, but they could not offer a group tour for sure as they did not have enough people yet. A private tour then is far out of our budget. Paloma instead was recommended by Linh and my sister, who went with them a few years ago. Thanks for the recommendation, Diana! 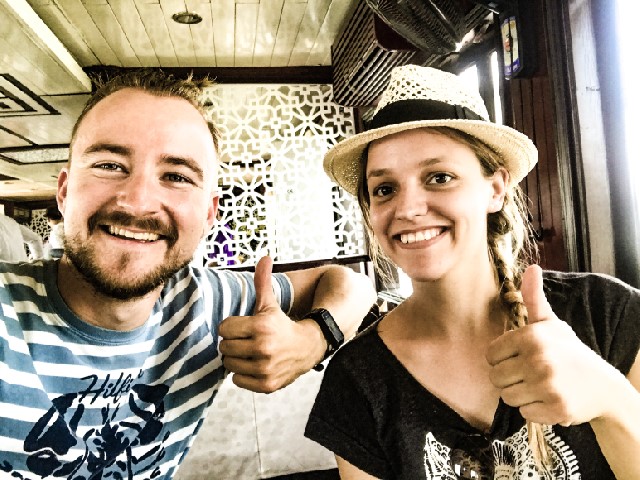 During a sightseeing tour on one of the islands at Ha Long Bay, I talked to a guy, called Harry, and his wife. They are from Kenya. Harry was working internationally in the plastics industry. Meanwhile he had retired. He spoke perfect English. I asked my question. “What does happiness mean to you?  Harry returned after 10 seconds of thinking: “Containtment with what I have”. I followed, “and how do you achieve it?” He just said: “Hard work and family.”

Some impressions from the trip: 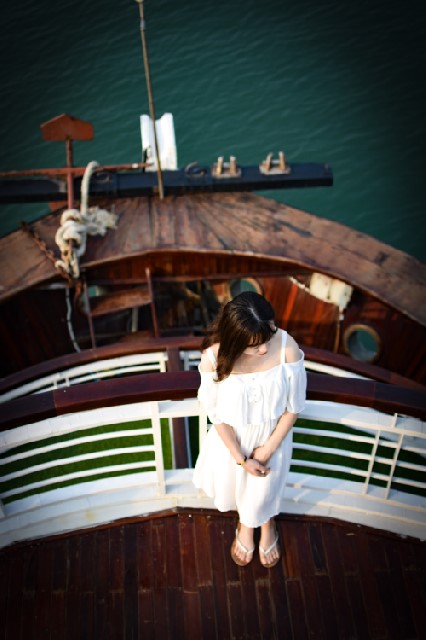 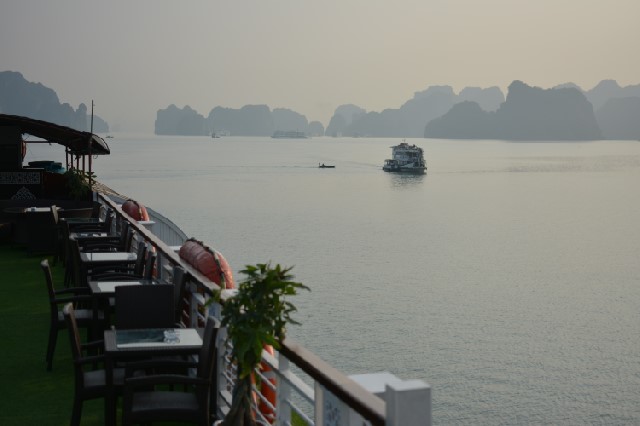 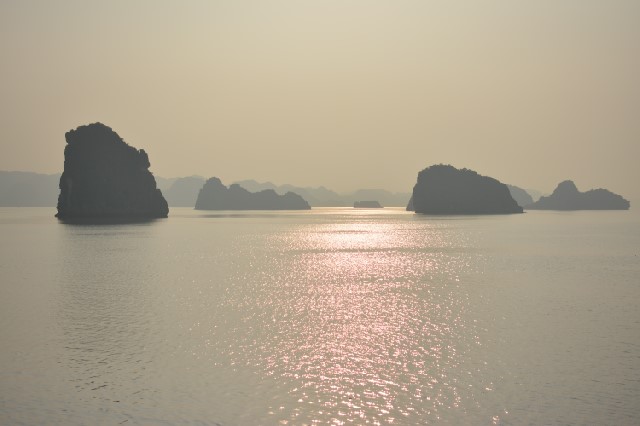 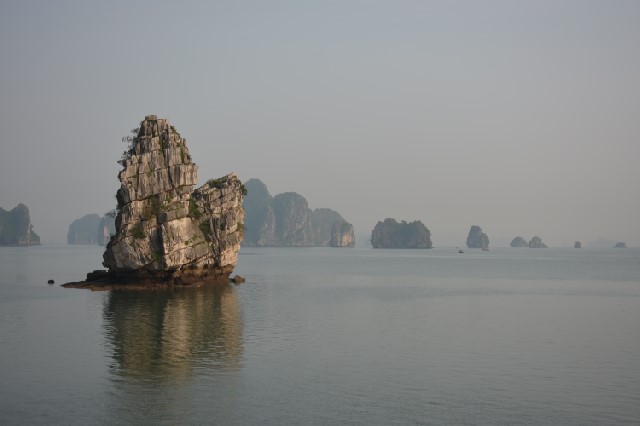 From the boat, we did a tirp with some smaller boats throught the place where people still live on water. As they could not afford any ground to build their homes on the mainland, they built them swimming. They even have a school: 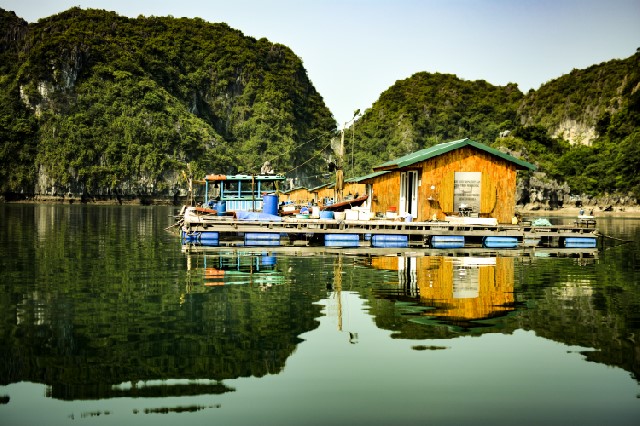 They are growing pearls: 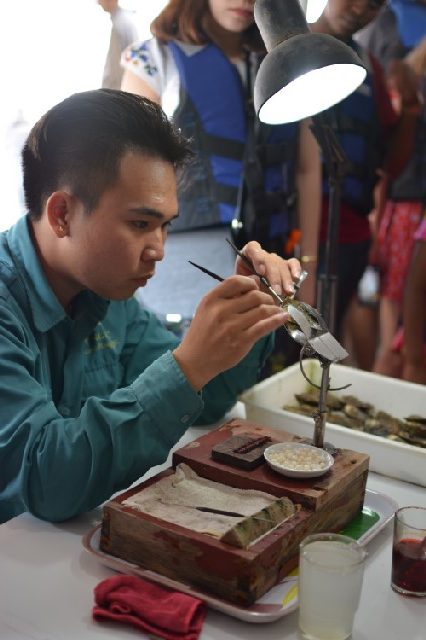 Back at the Paloma boat, we went on the water with some kayaks to enjoy this beauty of Ha Long Bay even closer. Later, some shower should refreshed us to become ready for the sunset party on top of the Paloma boat. We were powered up, having a great five course flash packer dinner. Haha. 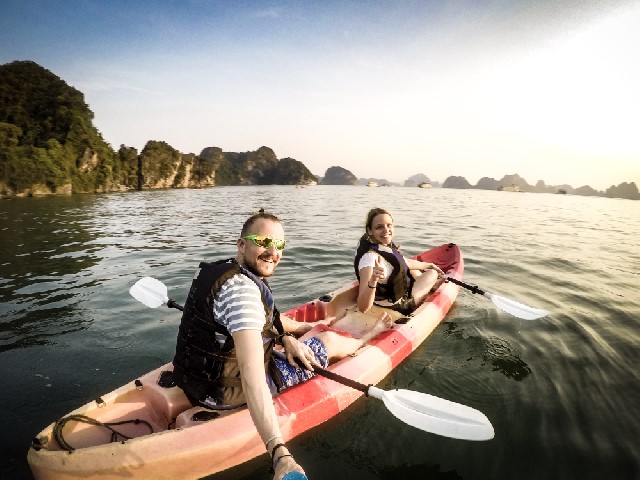 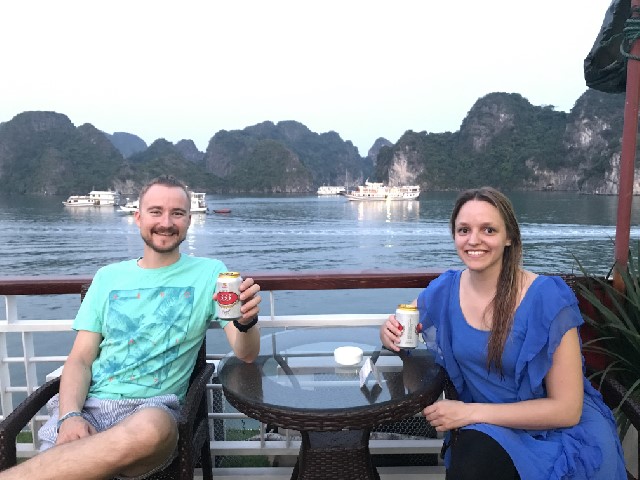 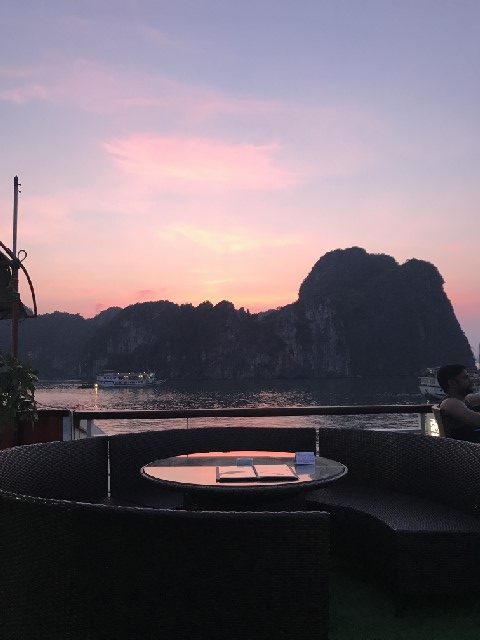 The next morning started with some Tai Chi on the upper deck, followed by a nice breakfast. Some cooking lesson should round up the experience on the boat before we left the Paloma Cruise ship. The guys from the cruise company took us to the local bus station on their private bus where we were thrown back into real backpacker life. YES! 🙂 Where do we have to go now? Luckily we were given a paper from the crew with some questions written on in Viatnames to make our way to Ninh Bin more easy. The questions in Viatnamese: “Where does to bus to Ninh Bin leave?” “What time is departure?” “How much does it cost for two people?” Asking some guys, we found the bus ticket office and after some phone calls the lady told us it’s 150.000 dong including our luggage. We put the money on the desk, however, no ticket was given to us. Strange, we thought. We asked again for a ticket but they refused. They rather asked us to sit down and wait. All with body language. OK, we thought, that might be the way here. Or were we ripped off? I connected with the ladies from the ticket office and this shot came out. Haha. 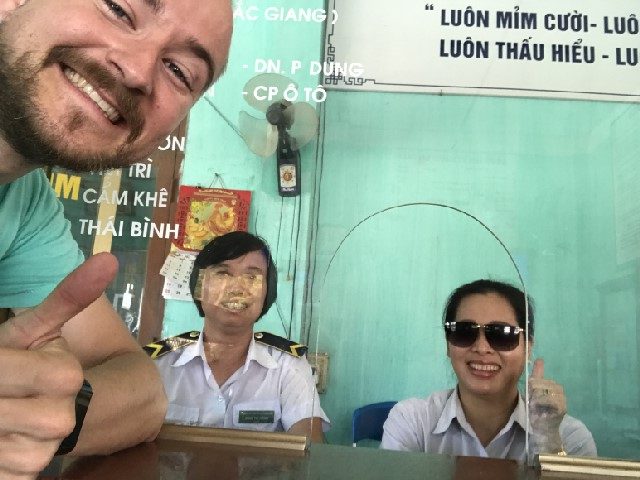 We were waiting for the bus. At the scheduled departure time, I asked them what’s going on? They confirmed we should wait. Suddenly, some screamd: “Last call, last call, Ninh Binh!” The lady paid the bus mate and we boarded the coach. …Always a crazy experience on these local buses. People listening to loud music on their phone, so that everyone on the bus is entertained by their sound. The guy in front of us was kind of sick and his nose and throat was affected. That was not difficult to overhear throughout the time on board. Coffin, soaking up from deep down below, and everything else you wanna imagine. There was a very strange guy next to me, maybe like 45 years old. He was sitting in between the seat rows, like sitting in the corridor. They have special boards on the bus to create these seats. There was no space to move for us. It was hot and I felt little dizzy. Suddenly his hand touched my knee with his fingers. Just for a short time. I was wearing shorts. The guy was just looking straight forward all the time. Five minutes later he touched again with his full hand, for a little longer moment. Wow, I thought, is this normal, is it just accidentially happening? Then, he touched again and it seems for some seconds he played with my skin hairs. Feeling even more dizzy, that was too much! I shook my leg to get rid of his hand. Please someone make this memory being deleted from my mind. Haha. 😉

Reading Viktor E Frankl, I found this cite about happiness:

“For the European, it is a characteristic of the American culture that, again and again, one is commanded and ordered to “be happy”. But happiness cannot be pursued; it must ensue. One must have a reason to “be happy”. Once the reason is found, however, one becomes happy automatically. As we see, a human being is not one in pursuit of happiness but rather in search of a reason to become happy, last but not least, through actualizing the potential meaning inherent and dormant in a given situation.”

Have a read on it – very inspiring.

The bus mate suddenly screemed: ” Ninh Bin!” So we got off the bus and a second later we were standing on the footpath in this city, no plan where to sleep tonight.

Join for the ride to some of the most beautiful places around Ninh Binh.