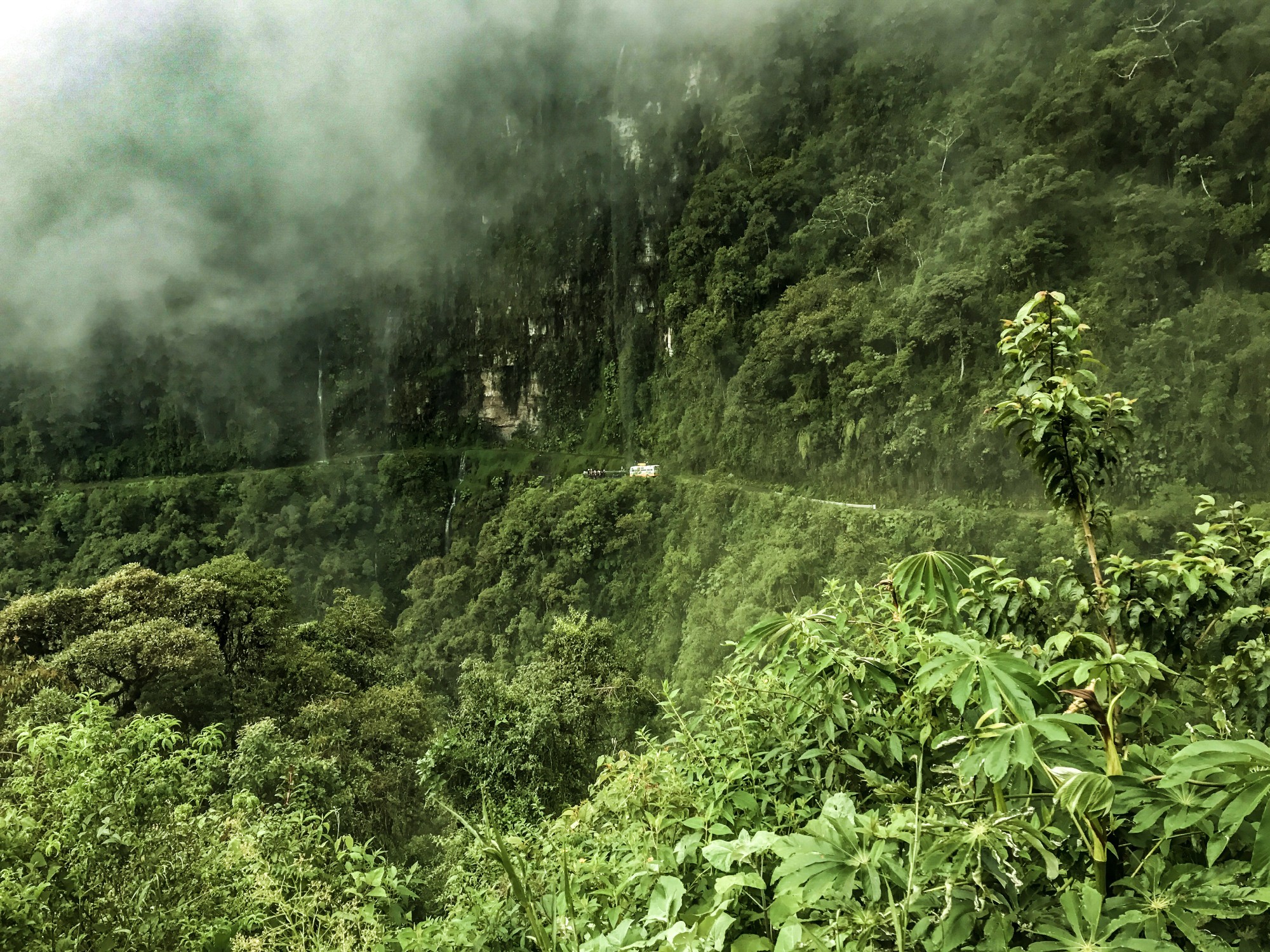 The last BoA flight to La Paz with the new guitar was about to happen. Meanwhile, going on these Bolivian BoA flights, I feel perfectly safe. But, will my guitar without protection cover make it onto the plane? Wearing my Patagonian boina and smiling at the lady behind the desk did well, I was allowed to take the guitar as carry on. 🙂

Ok, I arrived in La Paz where I should meet my friends Britt and Remy again. We went on a day-trip of a different kind…

…It is untrue. If you feel like something sounds dangerous, don’t do it. Why do we do it instead? Do we want the crazy experience, do we want the story or do we want to life more intense?

I may ask you to sit down before you continue reading from this point. This road is named for a reason – unfortunately. The following text was mainly written on the day of the tour and fine-tuned a few weeks later to provide an authentic picture.

Britt, Remy, myself and twelve other crazy people went on this tour. Downhill one of the most dangerous roads in the world. Until nine years ago, this very “road” was the only road connecting La Paz with the Amazonas. Gravel only. We were accompanied by our two guides and the bus driver. The guide created some good mood on the bus while we were travelling to the starting point to make it an unforgettable day. It became unforgettable. All went well in the beginning, we had breakfast at 4.600 m and I put some coca leafs in my mouth to prevent altitude sickness.

View from the top point where we had breakfast and started our biking experience, initially safe asphalt road: 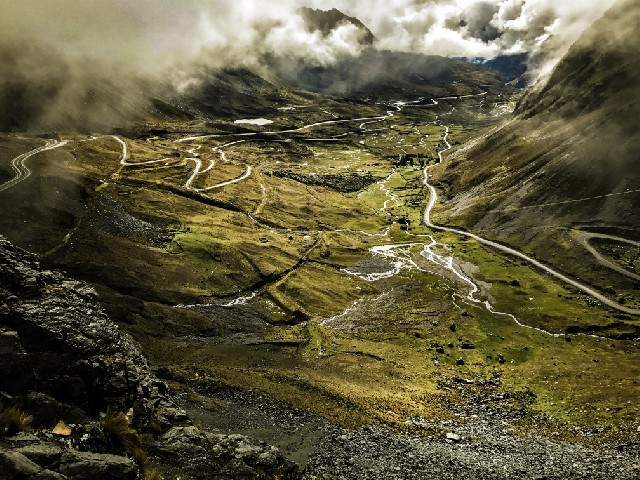 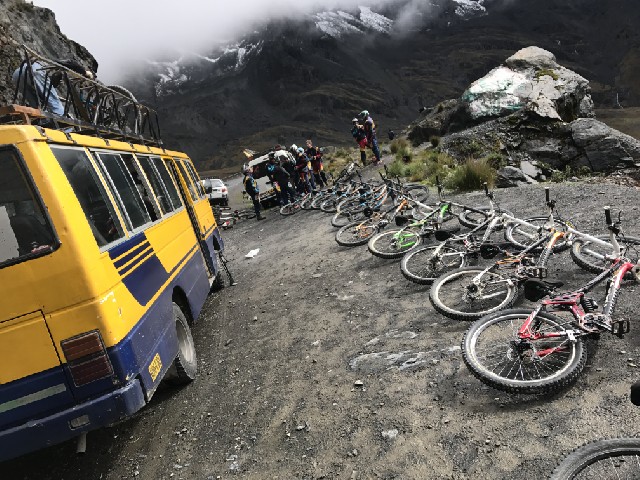 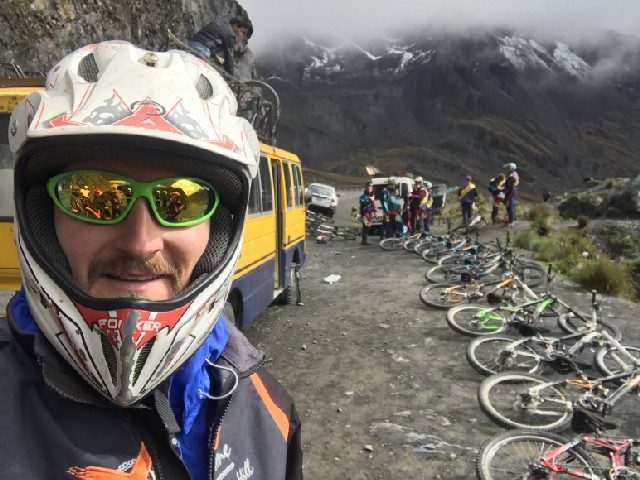 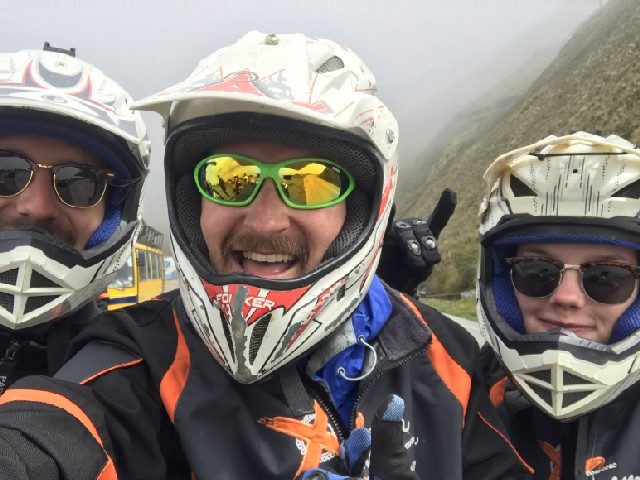 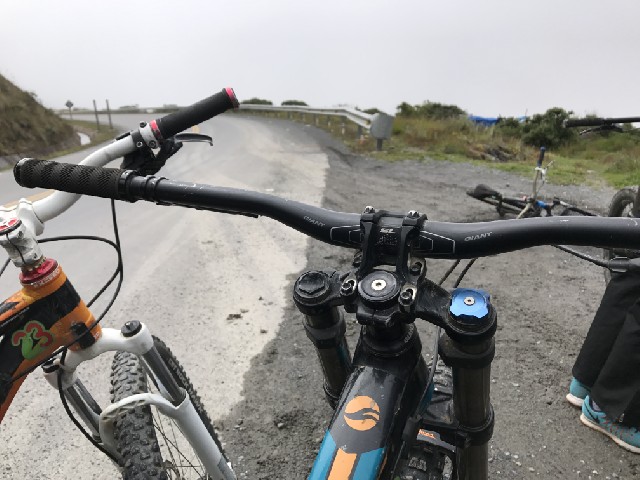 It started: A nice ride downhill on the asphalt with some great sight and views. After 30 minutes we reached some clouds and rain, also it became little darker. The bus brought us upwards again to start that very road which is not build with asphalt. Death Road. Dirt, stones, gravel and barely any side road protection – well in fact at the most dangerous spots none. While we were still on the bus driving the initial meters on the road, there was just fog around us and we could not see any trees next to us. Just to clarify: No trees next to you means like there is nothing next to you, but a cliff and some hundred meters vertical straightness. The bus shook left and right as of the big holes on the road. You just think: “OK, several agencies and more biker do this trip every day.” We took our bikes and a group picture. Our guide made us say together something like “I will survive and not fall down today.” Which is good I think, since it wakes you up and motivates you to apply some concentration. We started the downhill tour. It was fun, over stones, some nice views into the valley through the clouds and lots of photos of people having fun. After about 45 minutes, our group of 15 tourists passed an ambulance car – the only one on the road I noticed – and we stopped at a viewpoint waiting for the bus to come down and bring our lunch. It took just a few minutes and the ambulance drove uphill in the direction of where we came from. The guide, I must say he was professional all the time, joked about the Death Road and that the road has not asked for any tribute this year. We need to understand: All the companies care about security of their customers and we choose a company were we truly had the feeling they do an extraordinary job on security. And I must continue, it was a good agency, comparing to other companies. We waited… no other bikers and no cars came down the road for around 30 minutes. We assumed something serious happened. One suggested, our bus driver is probably helping a biker. We waited, got bored. Some random travel stories were told by the fellows. After some more minutes, a group of four bikers with our second guide came down the road and we should understand from the four guys what happened: “We saw a yellow bus going down, is it yours? With bags inside and one bike at the top?” “Yes”, someone of our group answered. “It went down a 100 meters.”, they continued…. Silence. “What’s with the driver?”, one of us asked. The Australian guy returned, they don’t know… …What the fuck, everybody of our group was solidified. It took a minute until everyone realised what happened. Sadness all around, some fellows crying. We wished to have more detailed information about the driver. Nobody knew. The guide decided we will go downhill in a group slowly to reach a place with cellular network. He needs to call the agency. So we started for a 45 minute ride. Still the shock in our bones. Not talking to each other. I asked one of the Australian guys, who saw the bus going down, about more details. He described, first the rear wheel of the bus dropped over the edge causing the bus to go backwards down the hill. Then it flipped side wards four times. I heard about a falling distance of 80 to 200 meters from different people. We stopped at the next small village. Thirsty and no food with us, nor sugar in our blood. We got some water and we were told that a bus is going to pick us up to drive us to a restaurant. Some minutes later, we were told that we have to bike to the place. Which was not only downhill but also uphill. There was one persons with asthma on our group. It was an hour bike ride.

We started to also think about our belongings on the bus. “Guys, we are in Bolivia, who would give a shit about our backpacks?”, one fellow said. “People would rather steal our cameras than giving them back to us.” I hate to think that I will likely not get back my world round trip backpack and my stuff from inside since the value to get the things new is over US$ 800. And, I do not own a lot at the moment. I went through it in my mind: New GoPro Hero, all my accessories for the GoPro including the brand new stick I bought yesterday, LTE to WiFi Router, external battery with chargers and cables, my best cashmere pullover (well, who should have taken this on a trip as such?), locker, some medicine, sun-blocker, anti-mosquito, two pairs of high quality hiking socks, short pants, a clothes sack and the survival kit from my former work colleagues. And the quite new backpack obviously. Others also lost their passports, mobiles and credit cards. The food at the restaurant gave us some new energy. We cared a lot, and were told by the travel guide that they still have no information about the bus driver. We should write down our contact details on a piece of paper to receive further details later, also about our belongings. Some taxis picked us up from the restaurant to bring us back to La Paz. I buckled up as I used to do it.

Impressions from the Death Road: 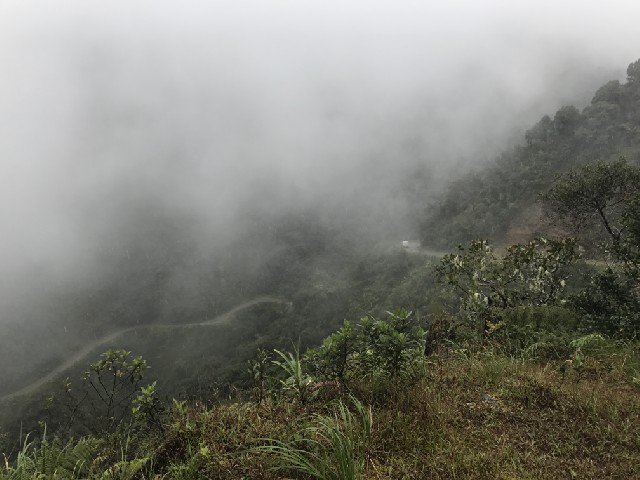 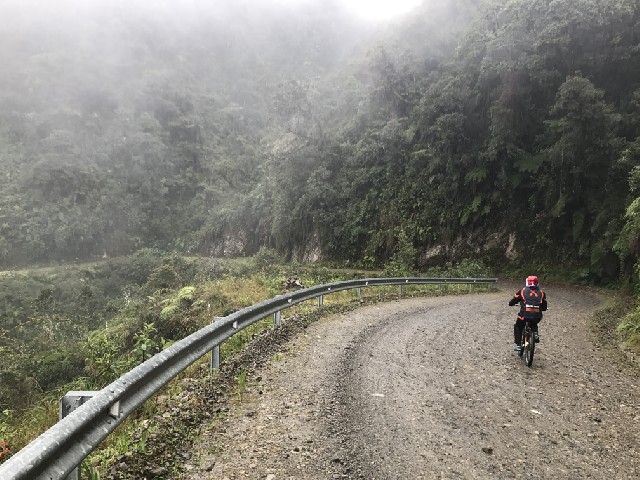 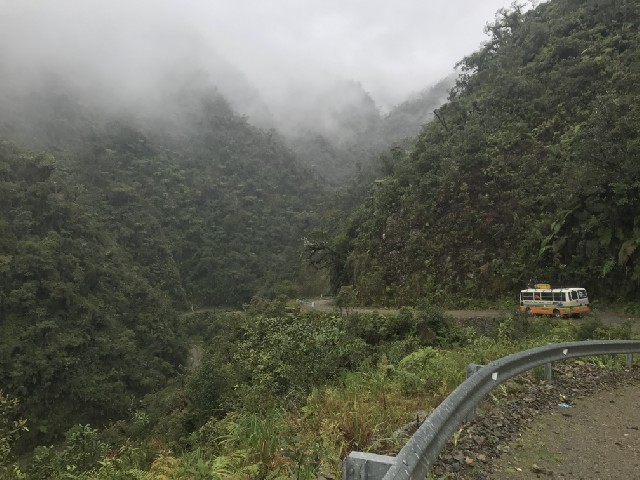 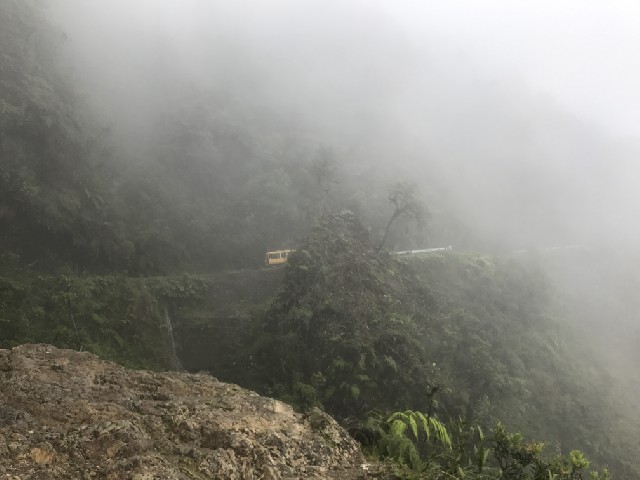 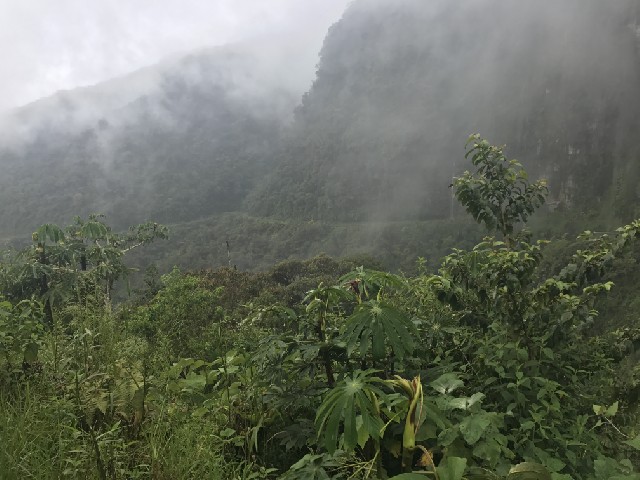 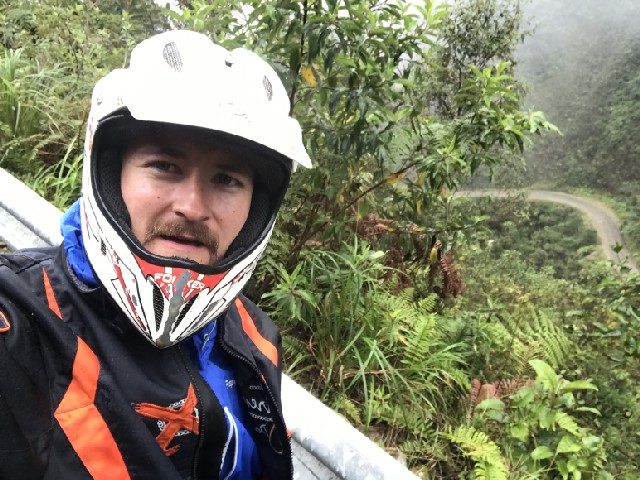 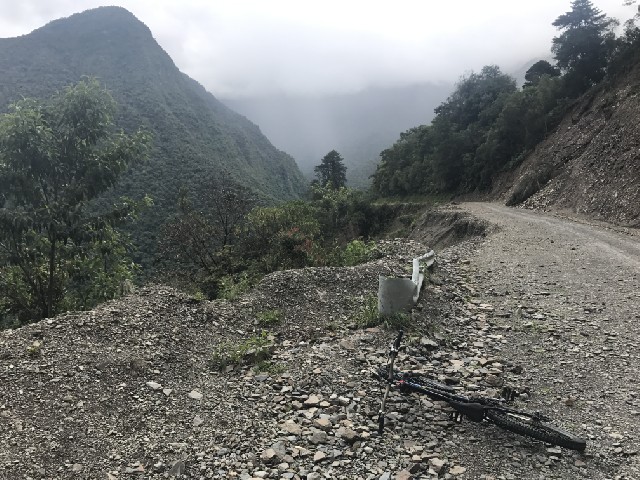 We arrived at the agency’s office at around 7.30 p.m. They were open. We went inside and I talked to the front desk person expressing our sympathy about what had happened. I followed by asking the woman if they have any information about the driver yet. Her face went very sad with wet eyes and she shook her head just a tiny bit. A very sad moment. A black day for all of the agency and us. I asked her if it is possible to talk to the manager. After the manager had talked with our tour guide he came to us to explain the situation: They sent a mini bus with a team to the spot right after they had received the call. Also to save our belongings, he said. He was at the spot in person to coordinate the processes. They do not trust the police. I expressed our deepest sympathy about what had happened to him again and that we are with the family of the driver. Further, I expressed that we appreciate the effort taken to get our stuff back. …I mean, people are risking their lives to get down the abyss to get our belongings. The manager told us we could collect our belongings tomorrow at 10.00 in the morning.

We heard about many different numbers of dead people on the Death Road. 22 and 28 death since 1998; 3-8 per year; some decades ago 96 people died in a bus packed with the double number of passenger allowed. If you like, have a look at this Top Gear clip to get a more visual impression about the road later: https://youtu.be/daQcxVqQJsI

The next day, most of us met at the agency at 10.00 a.m. to ask if our bags made it back. What they found lied in a corner. Looking at the dirty and wet bags was making it real. None of us had seen the bus in the jungle. Now we saw the indirect proof of what happened looking at our belongings. My bag was at the very bottom, not visible in the beginning. People started to collect. Seeing some orange colour created a neutral feeling. We truly thought not getting things back. I did not want to look at my bag nor into it. The bag made it, but a person not. Just unfair! All content was inside mine and the other bags. Our guide was not around to talk. So I texted him on Facebook to say ‘thank you’ for all the effort taken. The feeling slowly turned into something more close to happiness. Still having in mind that not all of the people who went with us survived the Death Road.

The backpack was almost new before, now soaked with oil, mud and dirt; it has not been washed untill today: 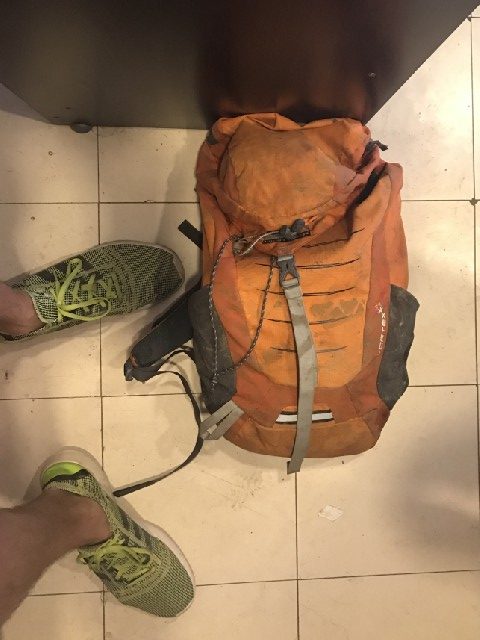 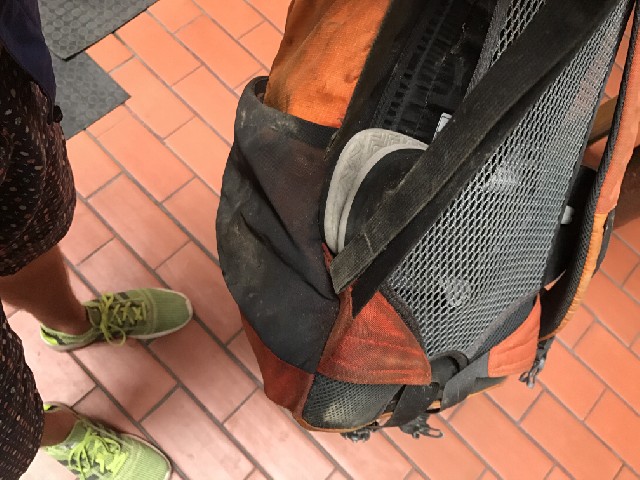 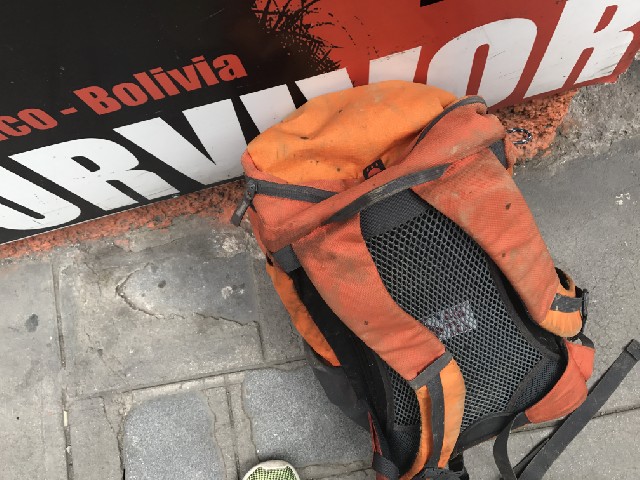 My reflection today – couple of weeks later – while writing: Although I had sold all my stuff in Germany and dematerialised extremely, it was very difficult to get along with the thoughts of losing all these belongings for no purpose. I tried to find a way to feel happy instead and it gave me comfort focusingnon the facht that my friends and I did not get hurt. It required active mind control to not think negative about losing these US$ 800 but focusing on the positive parts of the situation.

My friends and I agree that the agency did an amazing job. They acted professional and handled the situation in a mostly solid way. At least that is what we clearly perceived from being in Bolivia. They were just unlucky this time. Unfortunately, I came to the conclusion that it is very likely another agency will have a dark day next year. It’s the Death Road. We also agree that we got our things back from the bus is highly appreciated.

Balancing out the fun factor and risk factor, I came to the conclusion that I would not do Death Road again, if there was rain the week before. Fun is emotion. Risk calculation requires mind. Stupidly, this “no rain” condition when going on this trip was on my mind days before booking. I did not value this thought enough. Therefore, my learning is: Listen to your own thoughts and trust your mind. It is your mind’s duty to validate emotions and approve actions mindful.

My thoughts are with the bus driver, his family and friends. 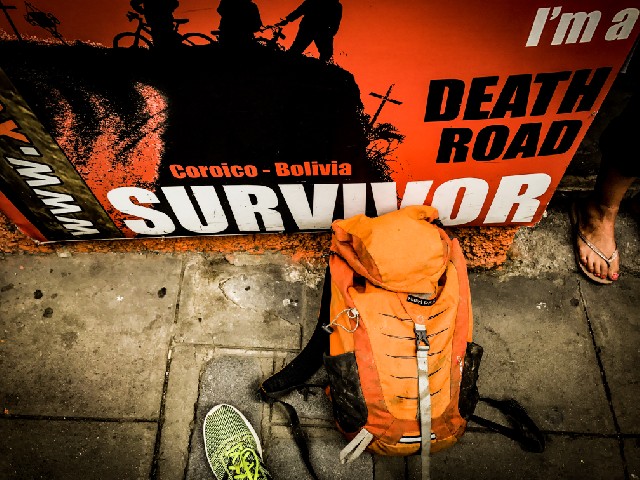