In the evening, I arrived in Sydney and checked-in at the well known Hostel Wake Up!. Nice place. The next morning, as of the two hour jet lag, it was not so difficult to get up early. I wanted to see the Opera building. Showering to get fresh and preparing the day backpack. I just realised the orange backpack material is still marked with oil and some dirt from Bolivia. I walked the 45 minutes to that amazing building at the river side to explore and find some good viewfinder perspectives. 🙂 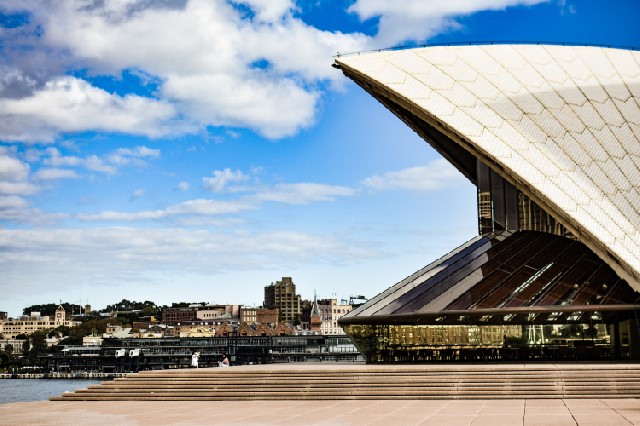 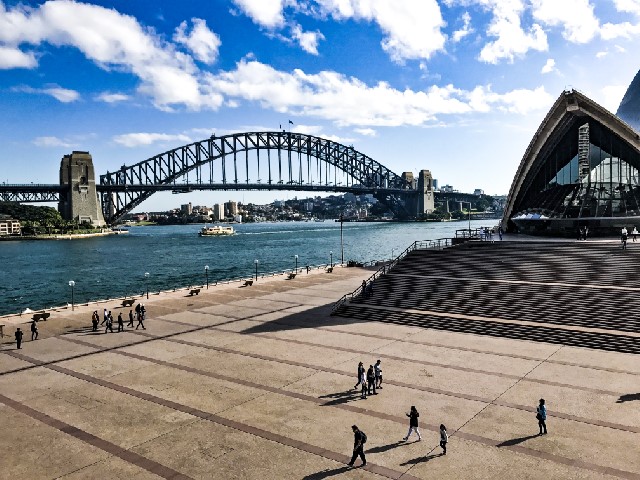 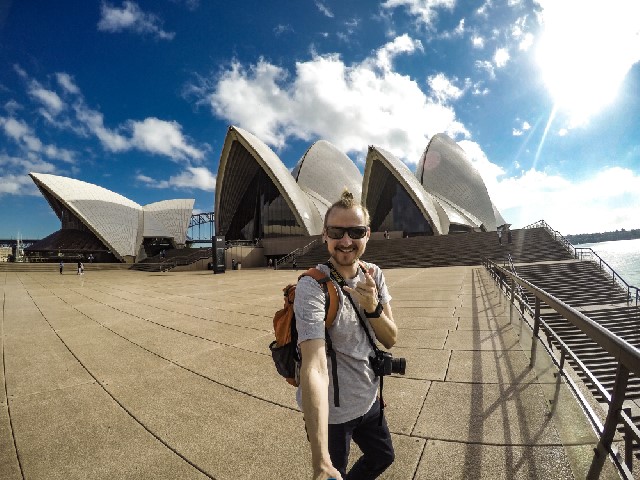 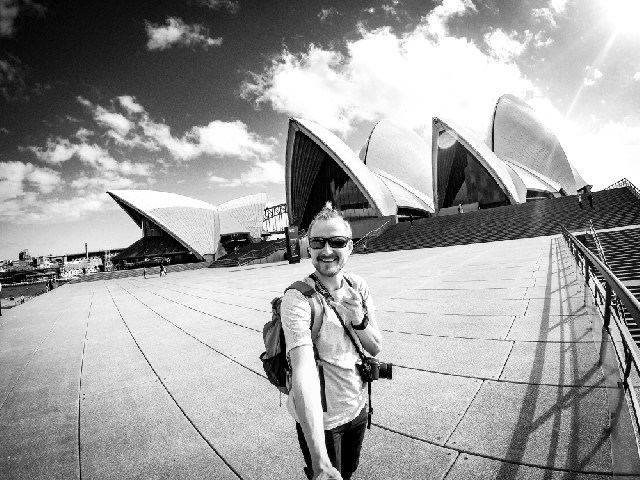 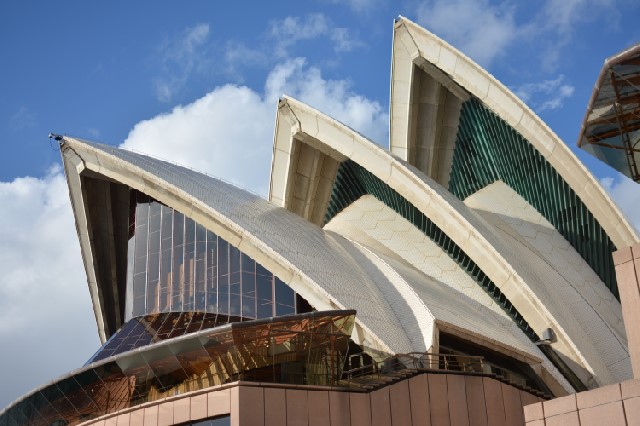 Following that, I reminded myself what the people said to see in Sydney, when I asked: “How do locals spent their leisure time here?” Accordingly, Manly Beach on the other side of the river is to be one of the places. And since I heard that a ride on a ferry is just AUD $ 2.50, I decided to go exactly there. One has to get a RFID Card to pay for the ferry rides. It’s free and you just pop up AUD $ 10. The cool thing: For this AUD $ 2,50 fare you ride all day long flat rate – on Sundays. Amazing leisure value I think. We started at Circular Quay, which is kind of the central public transport hub on water. After I arrived at Manly, I just watched where most of the people walked and followed them – easy peasy. 🙂 A sign then said: “500 m to the beach.” The way leads through the town centre where I bought two bananas, one avocado and some mixed nuts. I must tell: The avocado tastes even better than the ones in Central-/South America. I wondered if it is just my subjective taste today? At the hostel I got this free Optus SIM card. Very cool: You can do all the activation stuff on your mobile – already online and very user friendly. Activation, registration and Top-Up is easily possible with Credit Card or Pay Pal. How innovative is that? The process works ok, it took a while until it accepted my personal verification data from my passport though. But, it’s working! BAAAM, 500 MB a day for just AUD $ 2. Amazing value, especially for a short stay! So far I understand, live is very simple and convenient in Australia. It reminds me about the United States.

Some walking through Manly and along the beach side was nice. Then, I took the ferry back to Circular Quay. I wanted to ship underneath the bridge that I saw so often on TV on Sylvester. With the existing AUD $ 2,50 ticket, I hopped on one of the other ferries that looked like making their way underneath Sydney Harbour Bridge. The time passing by, I got tired and I stayed on that boat for 75 minutes until the final station Parramatta. Some power napping accelerated the clock. Haha. In Parramatta, an Italian restaurant invited me to have some Gnocci with Gorgonzola. No such food for months, I had almost forgotten how great my Italian friends can cook. 🙂 Still had to pay. 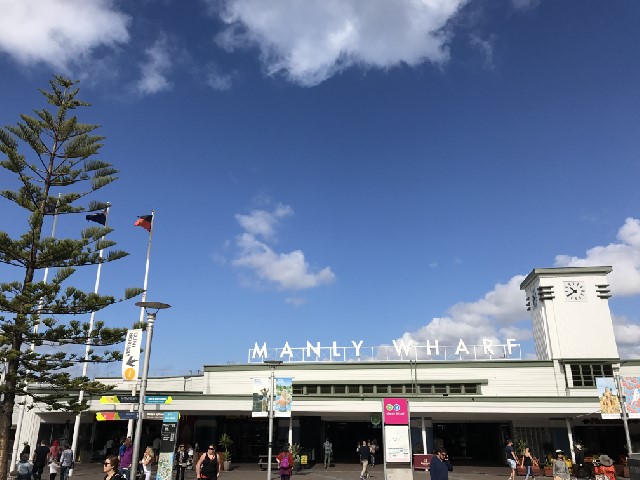 Not in the Zoo – wilderness in the middle of the city. 🙂 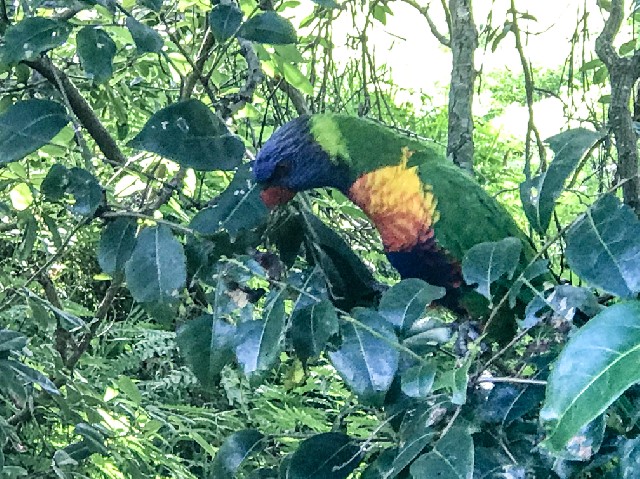 Later, the ferry to Parramatta: 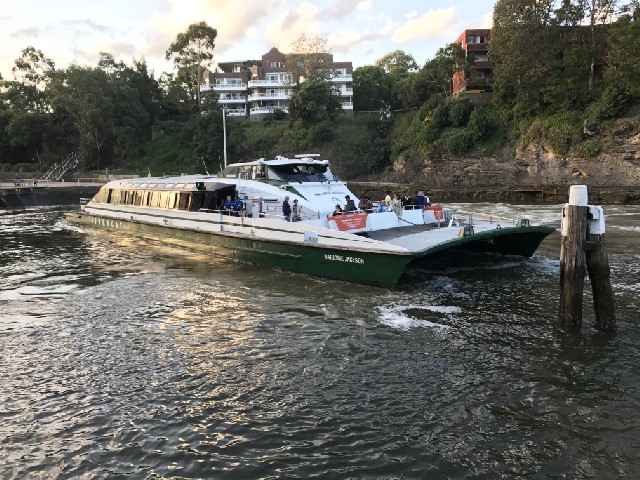 At least this Sunday, Sydney appears to be a very sporty city. And interestingly, many women work in jobs where in Europe we mainly see men. As street builder, traffic coordinator, on the ferry as gangway personnel. Nice! They also use quite a lot of makeup, I recognize.

The next day, I was given the great opportunity to talk to a General Manger of an Advisory division in a very big Australian Organisation. We met up for a coffee. Using the underground, I headed to the city centre where all these tall buildings are located. It feels like New York, just greener. This Monday morning I was in a good mood as I am continuously recently. Walking down one of the hallways in the underground I perceived the following:

People walking next to me, all in the same direction. Some of the 150 people walking in my eye’s view and another 150 behind me. They made these klack, klack, klack noise with their shoes. There was some certain rhythm in the air. Surprisingly, no one, absolutely no one was talking. There was not a single human voice in the air, just this boring Monday morning klack, klack, klack. In between them, I looked around with my little smile of happiness. What I saw were 300 people looking into the ground in front of themselves. I thought: What are they thinking? About last weekend? The things to do in the office today? What they gonna do tonight after the Monday working day is over? I was sure, a Friday would look and sound different. And I assumed, after looking into some faces, that most of these people are probably not following their dream today. Do they even know what they dream about?

Contrast. Back again on the outside ground, I was waiting at the traffic light to pass Kent Street at Margaret Street, heading east. I saw a biker and smiled at him. He smiled back honestly and even stopped on the middle of the street. He was in his mid 40ies. A leather working bag and a nice jacket stored in the front basket of his bike. I started talking to him, “Hey, how is it going?”, “Great! How are you?” We continued a short conversation that lasted just one traffic light period. The guy said: “I thought I know you. You look like one of my friends.” I answered, “Yeah, same here.” …Well, it was just some small talk on the street in between two happy people that continued. “What’s your name?”, I asked. “Hendrik.” “Nice to meet you, Hendrik, I’m Alex.” The traffic light went green, Hendrik jumped back onto the saddle and wished me a nice day over his shoulder. …I wondered: What was that? A mutual smile and positive punch of mutual Monday morning happiness. So different form the 300 people experience in the underground. I continued my walk eastwards to the office where I should enjoy an excellent conversation with the Advisory Manager. 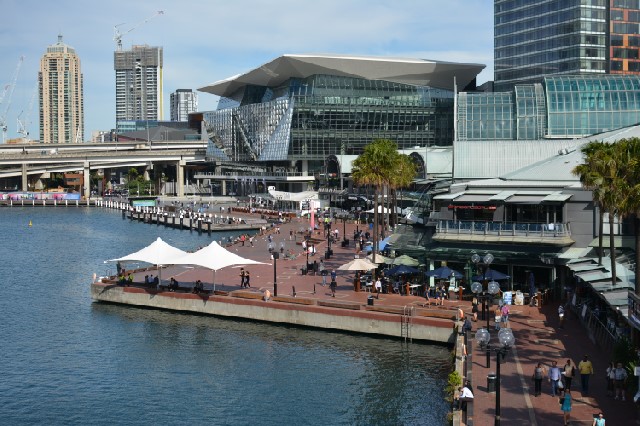 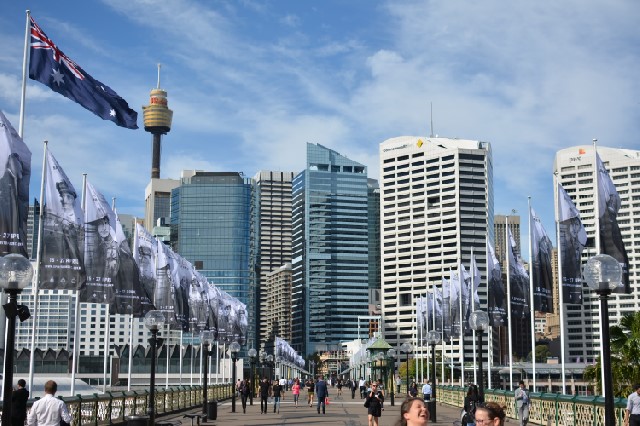 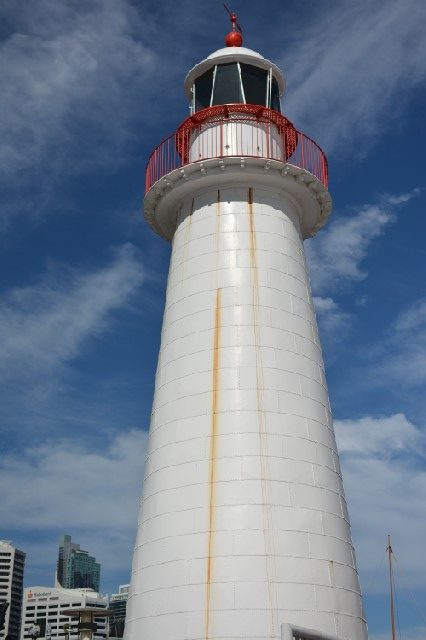 The next morning I was without any plan. Dressed up, I went down the steps outside of the hostel and asked myself: “Ähmmm, ok, where I’m gonna go now?” Haha. Just letting it flow. Some Asian breakfast would be wild, I thought. So I got an Vietnamese Sandwich and some Asian soup. Full of hot spices. Nice start into the day. Haha. I made my way to the botanical garden to see the Opera from a different perspective and hang around there for a while. A visit at the MCA (Museum of Contemporary Art) Café followed. I skipped the art part of it and used the internet to do some writing. 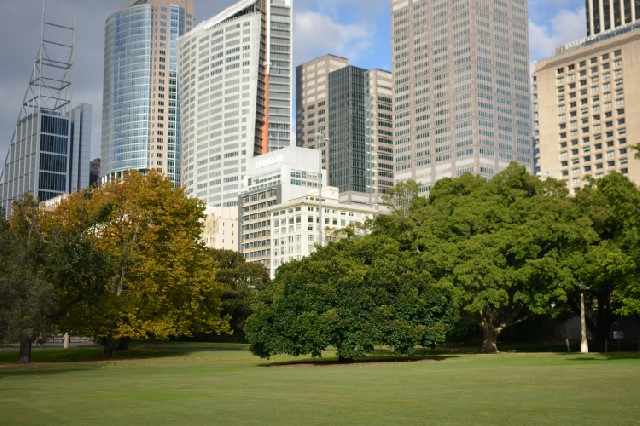 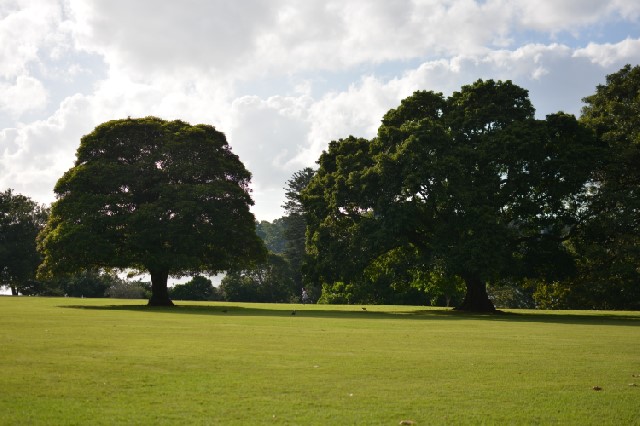 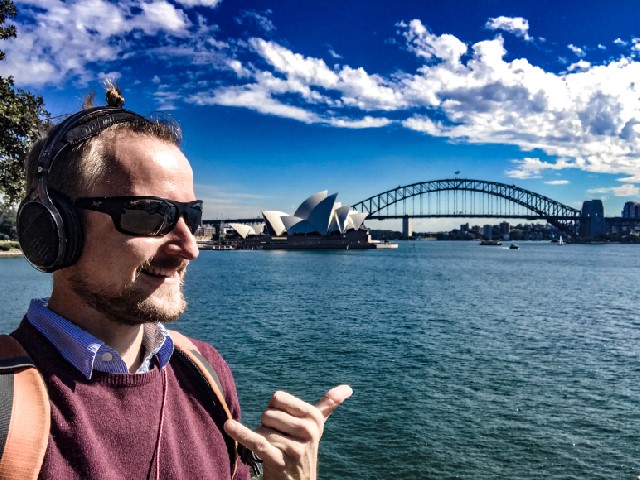 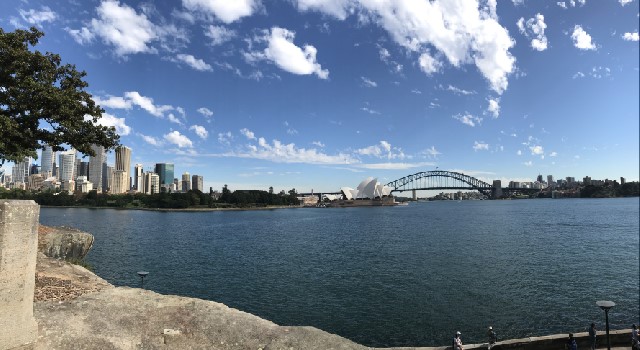 Some reading in the park – very recommendable book as described: 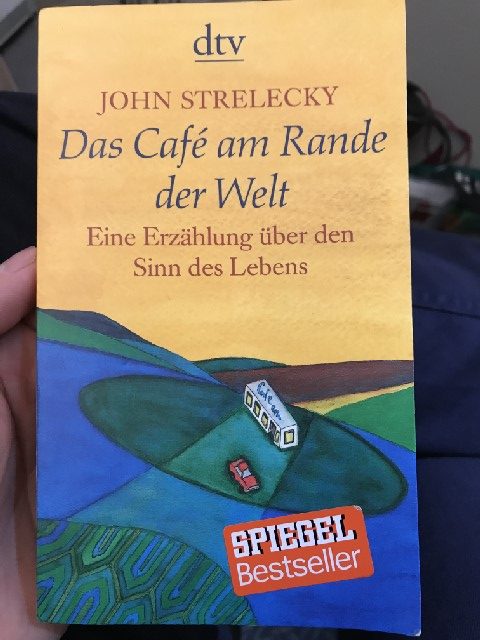 Get it now on Amazon! 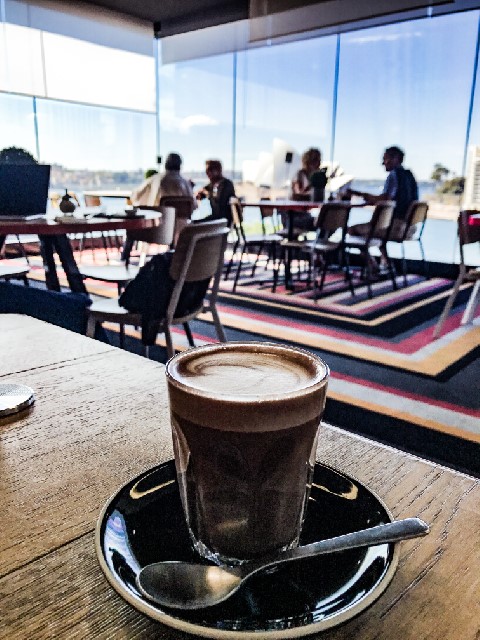 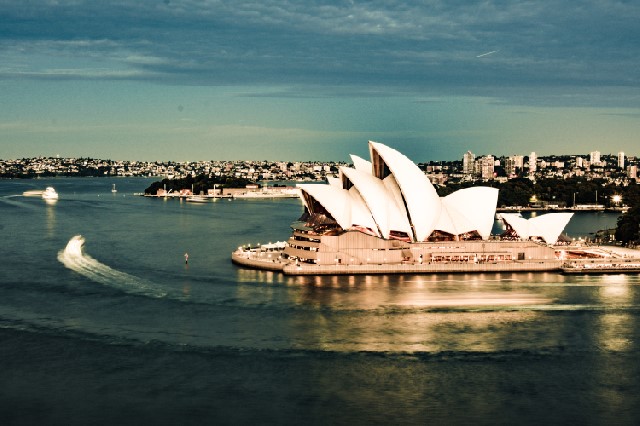 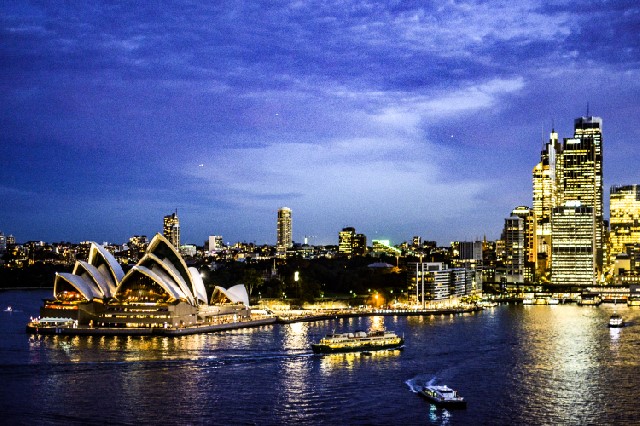 Next day, flight number 20 to Melbourne was ahead. After I had arrived at the airport, I realised that I forgot my awesome Meindl hiking shoes at the hostel. The shoes are kind of those high quality footgear you buy once in a life time. That sucks! …We will see how I’m gonna make the best out of it….

Checking-in my luggage, the ladies at the desk were not so much impressed about my smile this time. Was it because I’m not wearing my boina? 😉 They told me I may not take the guitar on the plain, I will have to check it in! What? The cost implication: AUD $50. For an instrument that pretty much cost the same amount of money. And it will probably result in a broken guitar since I have no cover for it. Bringing that argument, they returned that it’s my responsibility to cover the instrument. The discussion went for about ten Minutes. …I’m starting to love cheap airlines. Crazy business models they create to make some more money. No other airline had such an issue. Then, I reminded myself about “axelgoeswild” and said: “Thank you very much for the information.” I left and just went through the security check with my instrument. At the gate, I applied some strategy of human manipulation to move forward with the guitar. All the announcements at the gate to bring forward additional luggage, I handled in the wild, ignorant way. As the fourth last person I passed the gate hiding the guitar behind my body. Down the hallway and further down the stairs to the field, passing some more security, smiling at them in order to then enter the plain at the back going up the stairs. One flight attendant was greeting while entering the plain, again my hiding strategy with a big smile worked. Quickly I put the guitar in the almost empty overhead compartment. I was finally sitting in my chair and startet talking to my neighbour. As late as when the crew closed the overhead compartments, one crew member screamed: “WHO’s guitar is that?” ….”Mine.”, I said. She continued, “You may not bring it on board. You have to check it!” Explaining my opinion and that I would prefer some negations makes no sense here. They make the rules. The wild way is better: “Oh, I’m very sorry, I did not know.” (Learned that from my mother. Just pretend you are stupid. Haha.) It worked perfectly in the end. We were about to lift off. They gave me and my Cochabamba guitar peace.

At this point I’d like to state that lying is generally wrong! However, as long as none of the employees is negatively impacted personally, I don’t care. It’s about my personal Bolivian guitar vs. the profit of a multi-million company. Be wild. Be successful.

In comparison: Recently, at Colca Canyon National Park, I received way too much money in exchange for a ticket which was far too expensive for foreigners anyway – ten times the price locals pay. I did not keep the money, since I was told that the employee would have had to pay the difference from his own pocket at the end of the day. The entrance fee for one foreigner is more than the daily income that person gets. They feed their family from that. Be human. Be compassionate.

I must confess I love the visual appearance of Sydney. Sad to say good bye so quickly, you city of beauty and clean style. We’ll see how Melbourn is doing… 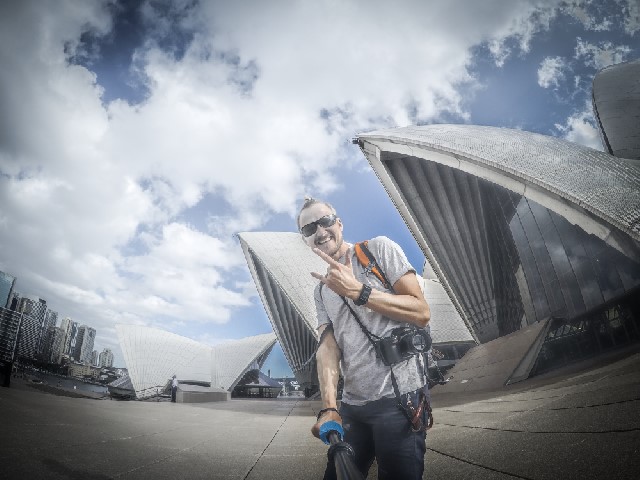